Are marble and brass still the hot materials? Has millennial pink been usurped by emerald green? Does anyone actually care? Dezeen editor-in-chief Marcus Fairs offers a guide to the bigger Milan trends that seem to have slipped under the radar.

Now the dust has settled on the fair for another year, some of the most striking observations from the world's biggest and most important design gathering relate to what wasn't there, rather than what was. With key brands absent, politics off the agenda and China barely mentioned, the week offers a somewhat outmoded view of what design means today.

However most fairgoers seemed blissfully unconcerned by this, mindlessly instagramming everything in sight and calling out ever-shallower trends based on the flimsiest of evidence. So here is our alternative guide to what was really happening (and not happening) in Milan this year...

There was a marked increase in Chinese visitors this year, with tour groups visiting shows around the city particularly noticeable. Chinese cities are investing heavily in their creative industries and sending delegations to Milan to get ideas, while homegrown media brands are sending journalists. This marks a huge potential change in Milan's demographic and reach, and perhaps signals the start of China's long-anticipated emergence as a key player in the design world.

On top of this professional interest, cultural tourism is a growth industry in China. This year, Milan design week happened to coincide with the vast Vinitaly wine fair in Verona – the world's largest celebration of wine – meaning many tour groups stopped off in Milan on the way. Design was merely the appetiser.

On the other hand, where was China itself? Wandering the streets of Milan or the halls of the Salone del Mobile, the world's most populous nation and its largest manufacturing economy might as well not exist. Stellar Works was the only Chinese brand we saw. Neri & Hu flew the flag for Chinese design, winning Elle Deco's Designer of the Year award, but otherwise China was the elephant in the room. Space Caviar's HQB Lamps installation at Palazzo Clerici (pictured), which featured LED lights bought at the Huaqiangbei electronic market in Shenzhen, was about the only show that acknowledged the importance of China in global supply chains.

There were plenty of big consumer brands showing in Milan again this year, including LG, Lexus, Samsung, Audi, Pepsi and Panasonic. But most of these are older, established brands rather than the ones that are changing the world right now. Where were Google, Apple, Facebook, Uber and Tesla? Where for that matter were Nike (who stole the show last year) and Adidas?

Of the movers and shakers on the Dezeen Hot List, Airbnb had a small-but-exquisite presence, while IKEA – which topped the brands category of Dezeen Hot List last year – pulled out all the stops with its massive IKEA Festival and a second large-scale presence at Tom Dixon's Multiplex.

Instagram, which has become the way most people now interact with the week through hashtags such as our #milanogram2017, sent a high-powered delegation with a mind to possible participation in future. But otherwise, the brands that really matter stayed away.

Hot topics on our (and our audience's) radar right now include driverless cars, artificial intelligence, robots, new materials, virtual and augmented reality, Brexit, Trump, refugees, climate change… all of which were practically invisible in Milan. Granted, it's a trade fair, not Davos. But still, to spend a week at a design event and not be provoked by work addressing these topics feels odd. Which all points towards...

Milan might be the biggest and most important design week, but it has failed to keep up with what design is these days

The Triennale Design Museum's big exhibition this year was on the history of design for children. Enough said.

Honestly, we tried looking for design trends. Really we did. But without running a statistical analysis of everything that was presented across the city, and comparing that with past years, who's to say whether any one material, colour or form is in the ascendency? And does it really matter, given that we live in eclectic times when anything goes and there is no dominant aesthetic? And when most furniture and lighting design is copying the fashion industry and creatively pillaging from the past rather than looking to the future?

Dezeen was involved in a lot of talks this year and they all drew capacity audiences. This is interesting since you might assume fairgoers on their turbo-charged dashes around the city on their self-imposed missions to carpet bomb social media with their observations don't have time to sit still for an hour or more and listen to people talking.

Yet they do. People appear to crave intelligent content. Plus a nice rest. And a chance to work those Instagram filters.

Milan is a bubble

Milan is the world's biggest and most important design event – but let's put it into context. A reported 300,000 people descend on the city for design week. During this period around 700,000 people visit Dezeen, but this year only two of our stories about Milan were among the top 10 most popular posts (our guide to the must-see shows and our Milan 2017 category).

If you take the month as a whole, none of our Milan content makes the top 10. Stories about architecture and interior design are way more popular. Sure, Milan was the most popular event on Dezeen Hot List last year and in third place overall, but that is to a large degree down to the fact that we write about it so much – it generated material for 250 separate posts last year.

Each year we joke in the Dezeen office that it would be better for our traffic to completely ignore Milan and publish more architecture stories instead. We aren't about to test the theory any time soon – going to Milan is important for other reasons besides simply reporting on what's happening – but we reckon we're probably right.

Milan gets more civilised every year

We said it last year but we'll say it again: Milan gets more civilised every year. This year the city even finally got rid of the death-trap pedestrian bridge over the (disused) train tracks between Porta Genova station and Via Tortona and replaced it with a street-level crossing (which doubled as an exhibition venue for hugely ambitious proposals to further embellish the city).

On the architecture front Herzog & de Meuron's Fondazione Feltrinelli is the latest noteworthy addition to a lengthening list of great new buildings, which includes OMA's Fondazione Prada and Stefano Boeri's Bosco Verticale among world-class projects in the city. And the welcome trend for opening up spectacular historic venues continued, notably with Airbnb's takeover of the Casa degli Atellani, where Leonardo da Vinci lived while painting The Last Supper.

You can even find taxis waiting outside Bar Basso late at night rather than having to phone for one only to see it hijacked by another reveller in front of your eyes.

Which brings us to…

For a bar with no music, a peripheral location, a life-threatening crush and very expensive drinks, Bar Basso makes no sense as the design world's watering hole of choice. Every year, people call for the madness to end and for a rival bar to emerge. But none ever does. This year it seemed busier than ever, as venue parties got tighter with their door policies and the police shut down the rowdier venues, meaning people diverted to a roundabout on Via Plinio for their (booze-fuelled) networking.

Which is, after all, the main reason why Milan remains the one unmissable event in the design calendar. Cheers. 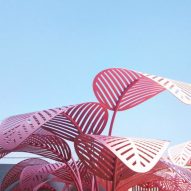