Swiss architect Peter Zumthor claims his renowned thermal baths in Vals have been ruined by an "egotistical" developer.

The Pritzker Prize-winning architect lived alongside the Therme Vals spa and hotel in the mountain hamlet of Leis in Vals for almost two decades, during which he lost a battle with property developer Remo Stoffel to buy the complex.

The commune voted to sell the site to Stoffel in 2012 for a reported CHF 7.8 million (around £6 million today), so the hotel could be redeveloped. Zumthor is believed to have made a similar offer, but was refused.

"This project was a social project, me and my wife lived there for almost 20 years with the community and it was owned by the community and was successful," Zumthor told Dezeen during an interview at the Fondation Beyeler, where he is working on an expansion of the Renzo Piano-designed art gallery.

"It now belongs to a financial figure who bought all of it and destroyed it," he continued. "The bath is a landmark so nothing will happen to the bath, but this social project is dead."

The Therme Vals spa was heritage listed just a couple of years after its opening in 1996, but Zumthor believes the project lost its social character after the buyout.

"The tragic thing is that it's an egotistical local guy that killed it all," he said. "That's how it is."

Submerged into a hillside, the spa and hotel complex is faced in slender pieces of quartz stone that lend the walls a layered appearance like a slice through a rock formation. Water piped from the area's mineral springs fill a network of baths in the base of the complex.

The spa and hotel made Vals a tourist hot spot, but Zumthor claims tourism to the area has fallen by around 60 per cent in recent years.

LA-based Morphosis also won a commission to design a 381-metre-tall hotel tower on the site in 2015. But the scheme quickly became surrounded by controversy when the jury distanced itself the choice of appointment.

The 7132 Tower is expected to complete in 2019, but Zumthor believes the project may not run smoothly, with the proposed site protected for the thermal springs.

"This is a sort of a cabaret," said Zumthor, referring to the scheme. "I could have told Thom Mayne early on 'get your money and don't work here because I know these people'."

"I even knew the place they told him to build is all protected land for the hot spring. They didn't tell Thom," he added. "But it's ok, that's life."

Both Morphosis and the developer 7132 Hotel are adamant that the land is not protected, and that the project will go ahead.

"The project is still going on. The community has to vote for the project Femme de Vals which is planned this year," a spokesperson for 7132 Hotel told Dezeen.

While Morphosis said: "The information you have heard is incorrect. The project is still active." 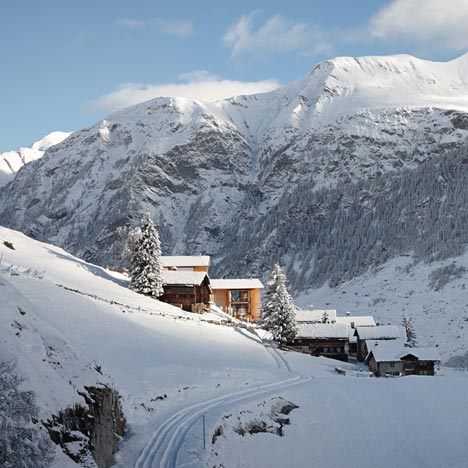 Zumthor announced plans in 2013 to rent out two of his properties in Vals, which he originally built for himself and his wife.

The architect, who came seventh on the inaugural Dezeen Hot List – a guide to the industry's key figures – is currently working on an extension for the Los Angeles County Museum of Art and a trio of events and gallery spaces for the Fondation Beyeler in his hometown, Basel.