The Office 3.0 system he designed for an office in Turin, Italy, uses a system of sensors to monitor employees, and instructs heating and cooling systems to follow them around the building to create unique environmental bubbles. 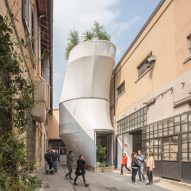 Occupants could set their preferred temperature via a smartphone app. Fan coil units situated in the false ceilings would be activated by their presence, creating a "thermal bubble" that follows them around the building.

As well as allowing individuals to set their own ideal temperature, Ratti believes such systems could reduce energy consumption dramatically, because no energy is wasted heating empty spaces in a building.

"By synchronising energy usage and human occupancy within buildings, we can create a more sustainable and responsive architecture – theoretically slashing energy consumption by up to 40 per cent," he said.

The concept builds on previous projects developed by Ratti, such as the 2015 Cloud Cast installation in Dubai, which uses motion tracking technology to direct clouds of water vapour at people to cool them down.

The jets of mist are expelled from a series of cylinders mounted on the ceiling controlled by ultrasonic sensors that detect detect people passing by.

The idea is intended to make cities like Dubai, where summer temperatures average around 40 degrees celsius, more liveable, without having to use the vast amounts of energy required to air condition large spaces.

Ratti used a similar idea in the Local Warming project he developed at MIT's Senseable City Lab, which uses motion sensors to focus beams of infrared radiation on people as they move through a building.

The idea involves mounting infrared lamps on the ceiling, which tilt and rotate to focus beams of radiation onto people to warm them up as they pass underneath.

Ratti spoke at our first Dezeen x MINI Living talk in Milan last month, which we live streamed and can still be watched in full on Dezeen's Facebook channel.

All images in the video and story are courtesy of Carlo Ratti Associati. 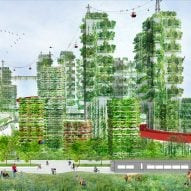