Zaha Hadid Architects has unveiled its design for a residential complex on Mexico's Riviera Maya, based on traditional Mayan design and surrounded by tropical woodland.

The London-based firm designed the Alai complex for a strip of land between the sea and a lagoon near Cancún, a hugely popular tourist destination on Caribbean coastline of the Yucatan Peninsula.

The aim is to provide housing for the area's rapidly growing population, which has almost doubled since the year 2000, while causing minimum impact on the site's existing ecosystems.

Residences will be split across a series of towers, which will only cover seven per cent of the site's footprint to allow the rest of the land to flourish with vegetation and wildlife.

Curvilinear balconies and openings on each of the residential blocks that will offer residents unobstructed views either to the Caribbean Sea or the Nichupté Lagoon, and also aid natural ventilation.

Each facade will be made up of repetitive forms and variations of the shape. The architects based the feature on the traditional masonry and architecture of the Mayans, an indigenous civilisation that built impressive stone pyramids at sites across the region.

"The differing texture and patterning of each building's facade within Alai is generated by assembling the balcony units and facade elements in varying sequences," said the architects.

"This enables elements of relatively few different designs to create a unique facade for each building, yet maintains a cohesive design language throughout."

Zaha Hadid Architects is also collaborating with European landscape architects Gross Max to replant the areas of the site left bare by the previous occupants.

A botanical nursery set up to aid the restoration of local species and ecosystems will eventually become a visitor and education centre.

Coastal wetland will also be planted to protect the mangroves of the nearby lagoon.

A woodland nature reserve will feature a series of suspended footpaths, allowing the residents to access the woodlands, coast and lagoon without disturbing the ground.

Each of the towers will linked by a platform raised nine metres so that local wildlife can cross the site without barriers. Perforations in the floor will allow light to filter down to the life below.

Communal sports, leisure and wellness facilities will be accommodated along the platform.

Zaha Hadid Architects topped Dezeen Hot List in 2016, following the surprise death of its founder earlier in the year.

The firm – now headed by Patrik Schumacher – recently unveiled its design for a supertall skyscraper in Manhattan. It is also working on a sinuous apartment complex in the Mexican city of Monterrey. 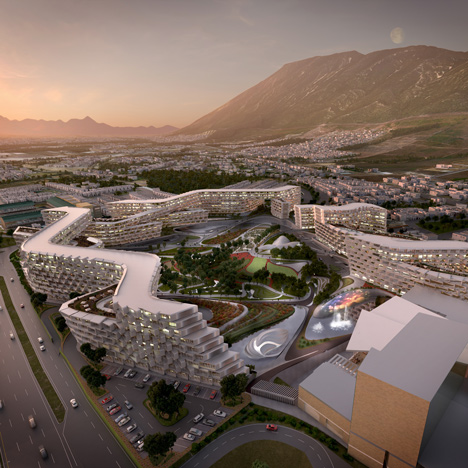