Tokyo studio We+ added dimpled texture to its Drought chair by embedding shrinking balls of resin into wax.

After mixing the materials together and pouring them into leg and seat moulds, We+ left the resin to dry, decreasing in diameter as it did so. This allowed the balls to fall away from the wax, leaving behind a distinctive pockmarked pattern.

The studio carried out five months of experimentation to perfect the method, trialling different materials along the way to achieve the dimpled texture they were after.

"We are interested in natural generative phenomena, and are always trying to find good generative shapes and textures," We+ told Dezeen.

The resin takes around a week to be completely dried and removed from the wax, which is then used to cast the chair in bronze.

We+ used the lost wax casting method. It sees the original pieces set in a clay-like casing, into which the molten bronze can be poured to fill the voids left when the wax melts.

"In this case, lost wax casting was very difficult because the structure is quite complex and interlaced," said the studio. "We thought the chair has a long history with many products and design contexts so far, so it was a good challenge for us to find a new perspective on this."

We+ chose bronze as a final material to represent the colour and texture of cracked and dried earth that comes about after long droughts. The studio was set up in 2013 by Toshiya Hayashi and Hokuto Ando, who graduated from Hitotsubashi University in Tokyo and Central Saint Martins in London respectively. 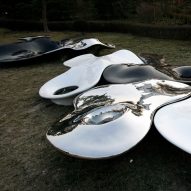 The pair often work with unconventional materials and methods, including using temperature-sensitive ink for furniture and wax moulded in a rotary motion to form vases. Companies including Sony, Marimekko and the Mori Art Museum have all collaborated with the pair.

 We+'s Drought chair was unveiled at Milan design week in April, alongside new machinery-inspired seating by Konstantin Grcic for Magis and a mushroom-shaped modular chairs by MAD founder Ma Yansong.