Lamps that adjust like construction cranes and pendants that look like they are wearing hats feature in New York lighting brand Roll & Hill's latest range.

Following a debut at Euroluce in Milan, Roll & Hill is showcasing a series of new designs in New York during this month's NYCxDesign festival.

For the first, Ladies & Gentlemen Studio has teamed up with Norwegian duo Vera & Kyte to create the Krane lamp, which hangs from a cord threaded through an arched fixtures.

A counterweight allows the position of the hemispherical diffuser to be adjusted like a construction crane, and incorporates a dimmer switch. The design comes as a larger ceiling-mounted model and a smaller wall version.

Their Half and Half series of pendants combines metal hat-like tops and glass bottoms, in combinations of conical or hemispherical shapes. Available metal finishes are blackened steel, brushed brass, oil-rubbed bronze or polished nickel.

Master glassblower John Hogan has designed his first pieces for Roll & Hill. Named Coax, the lamps comprise transparent tubes that sit one inside the other and hang over an glowing horizontal bar.

Additions to the brands existing lines include a smaller, portable table version of New York studio Visibility's Esper pendant lamps, which can be used indoors and out.

All of the new pieces are on display alongside older designs at Roll & Hill's SoHo showroom, 3 Mercer Street, New York, during the citywide NYCxDesign festival –taking place from 3 to 24 May 2017.

Other lighting designs launching during the event include pieces by Rich Brilliant Willing, Bec Brittain, and Lindsey Adelman and colleagues. 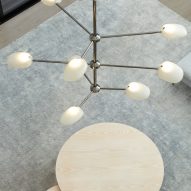