The Japanese House exhibition at London's Barbican doesn't offer solutions to the housing crisis, says Owen Hatherley, but it does show what's possible when architects respond to extreme change and instability.

In most places, certainly in Britain, the point of the private house is stability and predictability. Increasing in correlation with the rise of the house as an overvalued investment vehicle is an extreme conservatism about what that commodity actually looks like. So in order for the confidence trick that a mediocre mass-produced house should cost, say, £250,000 to be effective, the house has to look like a house in the most obvious and tedious way – bedrooms, garden, load-bearing walls, pitched roof, non-functional chimney, all need to be in the expected place.

One of the many interesting things about Barbican's The Japanese House exhibition is that the houses resemble cultural commodities such as cars, stereos, films and cartoons, with an apparent indifference to what a house ought to look like.

A British architectural writer and TV presenter described the exhibition on a social network as containing "more ideas to solve the housing crisis than will ever come out of Whitehall". It doesn't, although crisis is all over these houses nonetheless. But it isn't the house as a solution to crisis, it's the house as crisis – the private house reflecting and responding to extreme change and instability, rather than serving as a means of reassurance.

Crisis is all over these houses

The timescale of The Japanese House reflects this well. Japanese cities were destroyed in 1945 to a degree that makes the effects of the Blitz look minor by comparison. Yet, rather than being about utopian communal housing or heroic reconstruction efforts (both of which were part of the post-war Japanese story), the exhibition begins with the country's attempt to use modern architecture as a means of national branding, reinventing Japanese tradition in a different way to the uses it was put by Japanese Fascism.

The first thing you see is a three-screen film by Kogonada, Way of Ozu. It shows interiors from the famous film director's work, precise scenes of domestic life in elegant lightweight grid-like spaces, which are increasingly filled with consumer goods as the films move into colour. These traditional interiors were re-classified by Japanese architects and writers as proto-modernist, modular, fixed around a complex play of interior/exterior, and made up of replaceable parts.

"Katsura is Mondrianesque!" says Yashuhiro Ishimoto in his photo-book on the titular wooden 17th century palace, with its contributions by Walter Gropius and Kenzo Tange. The first houses we see are in the Katsura vein, wooden, modern, cubic and raised from the ground in country settings. A telling caption on most of them tells the visitor that they've already been demolished.

After that, we're mostly in a world of inner-city housing, of a very specific type – the single family house on a dense lot in giant cities like Tokyo and Kyoto, often very close to heavy infrastructure, with power lines above, private and often tailored to a specific client. This isn't a typology common in Europe or the US, but it dominates this exhibition, with only a couple of blocks of flats or country houses.

Most either attempt to protect or advertise the owner. Some of this is thuggish, almost paranoid. The mid-60s Tower House by Takamitsu Azura is brutalism at its most blunt and unromantic, a cave crammed into a tiny space between flats, vertical and with cheaply finished, abrasive concrete, with even the stairs cast out of the same mould as the main structure.

Similarly, Tadao Ando's 1976 Azuma House is bluff and aggressive to the street, windowless and bunker-like, with concrete fetishist interiors totally unimplied by the street facade. Even apparently playful work like Yamashita's 1974 Face House has a dark underside, a farcical response to these blunt concrete blocks that turns their motifs into comedy. Coming across something like Aida's early 1980s Toy Block House is a relief by comparison, a house-system making reference to the country's phenomenally successful toy industry, evoked here without angst.

Many of the houses are responding in some way to a hyperactive urban landscape of adverts and signs, a saturated world that comes into these sealed houses of the 70s and 80s only obliquely.

In one room, a series of films succeed each other, showing mass-produced modernity becoming increasingly irrational. An advert for Kurokawa's Nagakin Capsule Tower asks us to "imagine one of these capsules taken in a container ship across the Pacific", over a free jazz soundtrack. The 1984 short film Crazy Family depicts a family smashing up their own house; when it's over and destroyed, the pan shows you the "normal" urban landscape, of American-style system-built suburban houses crammed into far-from-suburban densities. This is then followed by a clip from the anime series Dragonball, in which a character shows off an instant capsule house. All of these were made during a property boom almost as insane as ours at the moment – mass-production did not mean affordability in 1980s Japan.

You can read disaster in the houses themselves

These historical sketches are on the upper floor of the Barbican's heavy Brutalist galleries. Below, are two full-scale recent houses. The first is Moriyama House, designed by Ryue Nishizawa for an ageing hipster who asked for extra modules which he could rent to pay for his very specific lifestyle. Rooms are never quite where you expect them to be, with glass gardens on either side, and a passage you have to duck to get into, with a minuscule bath. Fragments from his very 90s film and record collection are left around, with Built to Spill albums presumably left as a reference to the principles of the house.

Second is a Teahouse to the designs of Terunobu Fujimori. Standing on stilts, it is a fantasy out of Miyazaki, with Studio Ghibli films playing in the background.

Both of these houses show a shift towards display and fantasy, while at the same time remaining in the strict plot-size limits already established. Along with some of the post-crash work here, they have a certain indulgent whimsy. The likes of Sou Fujimoto's partly un-glazed modular House NA, complete with its vintage car in the tiny driveway, look more like they're designed to be showcased on this website than actually lived in. 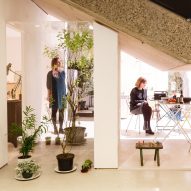 Other recent work shows an increased interest in houses on the edge of chaos, as if about to collapse – or just saved from collapse, as with Katsuhiro Miyamoto's Zenkai House, salvaged from the 1995 Kobe earthquake. Like everything else here, it's not about viable ways to survive disasters, or prevent them from happening. But what there is instead is something honest and unusual – you can read disaster in the houses themselves. Fear, imagination, aggression, dreams, all of them can be read clearly on the surface.