In this movie, interior designer Martin Brudnizki explains how he used vintage furniture and fabrics to create a homely atmosphere in New York's Beekman Hotel, which is shortlisted in two categories at the upcoming AHEAD Americas awards.

The Beekman Hotel is a conversion of a 19th-century office building in New York. It opened last year in the Financial District in Manhattan.

The hotel is shortlisted in the Bar, Club or Lounge and Lobby and Public Spaces categories at the inaugural AHEAD Americas hospitality awards, which take place in Miami next week.

"The building was originally built as law offices in 1881, and it is an incredibly beautiful building," explains Brudnizki in the movie, which Dezeen filmed in London for AHEAD. 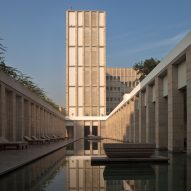 I don't believe in plonking "a Gehry here, a Gehry there", says Kerry Hill

"The design team's approach from the beginning was to respect that, almost like a conversation that we had with the building throughout the project."

One of the original building's defining features is a huge, nine-story atrium, topped with a pyramid-shaped skylight, which Brudnizki converted into a combined lobby, lounge and bar.

"The great feature of the Beekman Hotel is, of course, its atrium," Brudnizki says. "But the challenge was how to make this feel cosy."

Brudnizki used varying shades of green on the walls "to close the space in a little bit" and filled the atrium space with an eclectic mix of vintage furniture, cushions and rugs from the 1940s to the 1970s.

"The whole idea of that lobby is that it is very residential," he explains. "It should look almost natural in a sense, that it has evolved over time and things have been replaced and added to it."

The hotel also features a restaurant on the ground floor, run by celebrity chef Tom Colicchio.

Brudnizki says he wanted to create a simpler, more pared-back aesthetic for the restaurant, but one that people would still feel relaxed in.

"I think the most important thing is that people feel comfortable," he explains.

"And comfortability is ergonomic – when you sit in a chair – but it is all the other senses as well. I wanted it to be a very immersive experience."

This movie was filmed by Dezeen for AHEAD in London. All photography is courtesy of Martin Brudnizki Design Studio. 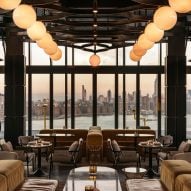