To create her graduate fashion collection at Central Saint Martins, designer Johanna-Maria Parv looked at how clothing historically restricted women's movement, and then made alterations inspired by female cyclists.

Parv, who graduated from the university's BA fashion course this year, presented a collection that was based on traditional tailoring, specifically from the 1890s and 1940s.

However, these tailored pieces had been modified in order to provide the wearer with a higher level of mobility – particularly when cycling.

"The idea behind my collection is embracing female power and strength," Parv told Dezeen. "Creating clothes for women in action. Women on bicycles, free from social restriction."

"The times I looked at in history was when women began wearing clothing that allowed them to have a more physical role in society," she added. "I tailored the garments into a shape that would allow women to move and adapt in active situations."

Parv, originally from Estonia, began her research process by looking at the works of artists Hannah Wilke – known for her exploration of feminism – and David Hammons for the way he "questions the values and functions in society".

She used a material palette of wools combined with leather, and colours that varied from brown tones to vibrant hues.

Precise tailoring was gathered around metal components in between the thighs, and cycling accessories such as lip-shaped helmets and gloves were supersized.

"Everything from the leather accessories to the plastic helmets are 100 per cent handmade," she said. "I moulded the leather between the legs to allow for the bike seat to fit within the womenswear clothing without having to wear trousers."

"I want to be able to create sensations and feelings that we are lacking in today's society, and in my opinion, mixing classical tailoring with accessories seems the best way of reaching just that."

Parv presented her collection at the Central Saint Martins graduate show, which took place at the university's Granary Square campus. Students from the four fashion pathways – womenswear, menswear, print and knitwear – all sent collections down the catwalk.

In a year filled with political unrest and uncertain futures, the students appeared to channel their frustrations into their projects, presenting garments fuelled by statements and performances charged with uneasy energy.

Dezeen's pick of the top 15 collections from the evening included Goom Heo's garments that fused her South Korean heritage with her time spent in London, and Elena Koivunen's poetic collection was based on the relationship between her parents and how she experienced this as a child. 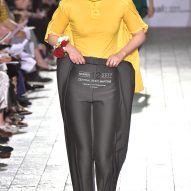