Following its proposal for flying warehouses, online retailer Amazon has filed a patent that would see its depots submerged underwater, with items summoned to the surface by acoustic vibrations.

Details of the patent, which was filed earlier this year in the US, have emerged this week. It outlines Amazon's vision for using lakes, reservoirs and purpose-built pools as "fulfilment centres" as demand for internet-bought goods increases.

It shows a number of ways that the stock would be dealt with inside an Aquatic Storage Facility, revealing that items would be dropped into the pools by parachutes or trucks.

But in each case, packages would be contained within a watertight box, complete with an air canister. When the item is ordered by a customer, a noise transmitted under water would trigger the air canister to inflate a balloon to float the package to the surface.

The items would then be received at the surface by the company's delivery teams, which in the future could include drones, before being shipped out to the customer.

Amazon believes this method would counteract the "inefficient use of space" by current warehouse set ups, as well as simplifying the process of picking stock.

"Online marketplaces are increasingly popular electronic forums through which customers may place orders for one or more items over the internet," reads the patent summary.

"The growth of online marketplaces, and the rapid expansion in the scope and breadth of their available offerings, has led to a concomitant proliferation of fulfilment centres."

The document goes onto discuss the complex logistical process from an order being placed to it being delivered, and how robots or staff are required to walk "several thousand feet" just to complete one purchase.

The proposal for Aquatic Storage Facilities is the latest in the line of futuristic patents filed by Amazon.

Towards the end of last year, a patent filed by the company emerged that would see warehouses carried by airships.

These warehouses could be stationed above cities, and used to store and rapidly deliver items via drone at times of high demand.

The drones that featured in the patent appeared to be an update on previous prototypes unveiled by Amazon, and would feature a body that resembles a typical aeroplane, with three tail fins and a small propellor.

At the time, the retailer claimed the service would be able to deliver packages weighing up to five pounds (2.2 kilograms) in 30 minutes using the small aeroplane-shaped drones, which can travel up to 15 miles.

A more recent patent revealed that the company seems to be making serious moves towards drone delivery. Published towards the end of June, the proposal describes a series of hive-like structures that would be used to house the unmanned vehicles in between journeys. 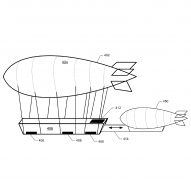