The blue and white sari famously worn by recently canonised nun Mother Teresa has been trademarked to protect her reputation.

The design of the cotton garment is now the intellectual property of the Missionaries of Charity, which was founded by Saint Teresa of Kolkata – as she is now known – over 70 years ago.

The trademark was granted last year after Biswajit Sarkar, a pro bono lawyer for the order, filed for exclusive rights to the design along with the name Mother Teresa in 2013.

According to the Guardian, he pursued the cause to combat "misuse" of the saint's reputation, after institutions named after – but not affiliated with – her order began receiving criticism from staff over late pay.

"There are many organisations starting schools naming themselves after Mother Teresa, and wearing the uniform, where the Missionaries of Charity have no connection," Sarkar said.

He added that the design was being used for commercial gain, including for religious book covers patterned with the stripes to give the impression that they are endorsed by the order.

The lawyer is now poised to take "severe" legal action against unauthorised use, including that by other charitable organisations.

"Even the nuns were asking me, if the people are not using it for commercial gains, should we stop them?" he said.

"But whether it is for commercial gain or not is not the issue. We are thinking about our identity. If the blue pattern, which is unique in the world, is diluted or used by the public, then one fine morning the organisation will lose their identity." 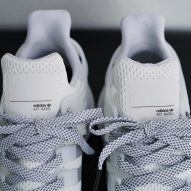 After witnessing extreme poverty in the city, she left the institution to work with those in need. The saint is said to have purchased the distinctive sari she became synonymous with during her first day on the Kolkata streets.

Her lifelong dedication to helping the poor earned her the 1979 Nobel Peace Prize, and she was canonised by Pope Francis in September 2016 following her death in 1997.

The trademarks acquired by the Missionaries of Charity only currently cover India, so Sarkar's next aim is to copyright the Mother Teresa name and the sari design in other countries.

He also wants to remove the children's costumes that imitate the design from Amazon's Indian site as soon as possible.

"Instantly we'll work on that, we will write to them," he said.