French artist Daniel Buren has unveiled the final part of a permanent installation at London's Tottenham Court Road station, which sees the walls of the ticket hall covered in colourful shapes and monochrome stripes.

The installation, named Diamonds and Circles, was commissioned as part of the major overhaul of the busy London Underground station, which is located at the intersection of Oxford Street and Tottenham Court Road.

Work on the installation has been ongoing, but the last section – a sculpture baring the same motifs as the walls and displayed in a 2.4 metre-high glass cabinet – has now completed. The installation is Buren's first permanent public artwork in the UK.

"A public work is interesting for me because you can develop the place, the people who use the space, and connections between all of these things. Museums attract only a portion of the population," said the artist.

"The public in the tube station is everyone, and there is a constant flux of people running both ways. I want to offer them a beautiful bubble of oxygen for the spirit."

Brightly coloured diamonds and circles set on a black and white stripy background pattern the glass-tiled walls of the station.

The installation joins mosaics by Scottish artist Eduardo Paolozzi, which were added to the station in 1984 but removed for a period of time in 2015.

Transport for London (TfL) faced criticism about the removal of the mosaics at the time – prompting a campaign spearheaded by the Twentieth Century Society (C20), that saw over 8,000 members of the public sign a petition to have them reinstated.

TfL now says that 95 per cent of the artist's original design has been put back on public view, and the sections of the artwork that could not be relocated at Tottenham Court Road were sent to Edinburgh College of Art where Eduardo Paolozzi studied in 1943 and later became a professor.

"London Underground has developed an expertise in mosaic conservation which will enable it to do a great job on future station renovations and show other owners across the capital what can be achieved," said C20 director Catherine Croft in a statement at the time.

"Whilst we would have liked to see the whole art work kept intact, we congratulate Transport for London on the repairs and cleaning that have made using the station a very special experience for busy shoppers and commuters." 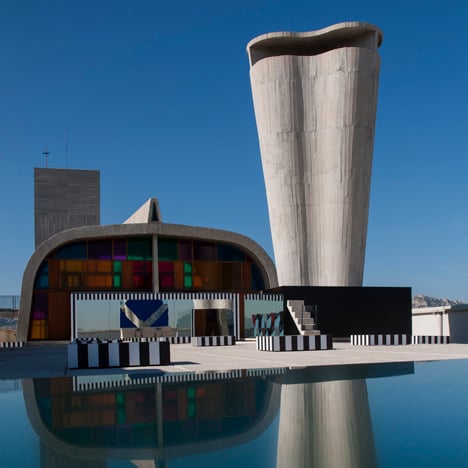 Buren, born 1938, has become well-known for his use of contrasting coloured stripes and often creates site-specific works inside iconic architectural spaces.Recently, he covered the glass sails of Frank Gehry's Fondation Louis Vuitton building in Paris with an array of multicoloured filters, and previously decorated the rooftop of Le Corbusier's Cité Radieuse.