Nike has used its trademark knitted material to create a sports bra, which the company has described as its "biggest Flyknit apparel innovation yet".

Janett Nichol, Nike's vice president of apparel innovation, described the product as "the most important piece of apparel for the active woman".

"A good one enables women to play sports, and sports can give women confidence in life," she said.

The brand's knitting technology allows the nylon-spandex yarn to be woven so it provides varying levels of support across a single piece of fabric.

This enabled Nike to cut down the amount of components from 41 pieces and 22 seams found in some of its other sports bras, to two single-layer panels and a binding.

Reducing the number of seams is intended to improve comfort, and the overall weight of the bra is lowered by 30 per cent compared to all others in Nike's line.

"Nike Flyknit allows us to be incredibly precise in a single layer," Nichol said.

Using motion capture and digital body scans, the design team assessed heat, sweat, cooling and movement areas on the body, and adapted the knit to optimally perform for all factors.

According to Nike, the bra also retains the ability to cup each breast individually, while maintaining compression during exercise.

"The goal of the Nike FE/NOM Flyknit Bra was maximum support and comfort that would allow women to feel and look amazing while doing anything they choose," said Nike senior bra innovation designer Nicole Rendone. "We prioritised support, breathability and cooling in essential zones."

The FE/NOM Flyknit Bra will be available exclusively for Nike+ members for 48 hours after launch, which was at 10am EST today, before it goes up for sale on Nike.com.

The brand specifies that the bra is best suited for C to DD cup sizes, and is available in size extra small to extra large.

Flyknit was first introduced for the London 2012 Olympics, and has since been purposed for athletics shoes and casual trainers, as well as drum skins and seating upholstery. 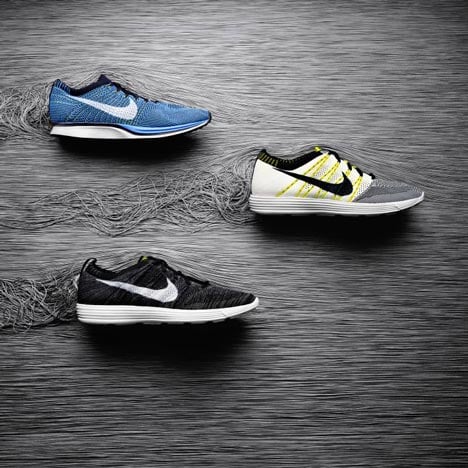