Belgian design critic and teacher Jan Boelen has been announced as the curator of next year's Istanbul Design Biennial.

He will become the fourth artistic director of the Istanbul Design Biennial, a showcase for innovative design that takes place in the Turkish city every two years.

His appointment was made by an advisory board that includes Design Museum chief curator Justin McGuirk, Dresden Museum of Decorative Arts director and e-flux editor Nikolaus Hirsch. The event has previously been overseen by curators including Joseph Grima, Zoë Ryan, and Beatriz Colomina and Mark Wigley.

The 2018 biennial will take place from 22 September to 4 November 2018, hosted by the Istanbul Foundation for Culture and Arts (İKSV), and its conceptual framework will be announced in the autumn. Boelen launched Z33 House for Contemporary Art in 2002, as a space for contemporary art and design that focuses on showing "everyday objects in a novel manner".

In 2013, Boelen introduced Z33 Research, design and art research studios that are transforming the museum from an exhibition-based to a research-based institution. And in 2014, he led the Z33 team curating the 24th Biennial of Design in Ljubljana, Slovenia.

Earlier this year, Boelen was one of several names suggested to take over as creative director at Design Academy Eindhoven, following the resignation of Thomas Widdershoven in July 2016 – although the role was eventually offered to Joseph Grima.

His relationship with the academy has had its share of problems – he was one of three senior teachers who resigned from their posts following a row over the autonomy of the masters courses in July 2012, but the trio agreed to return to their posts after claiming victory in their dispute.

The curator, who studied product design at the Media & Design Academy (now the LUCA School of Arts) in Genk, also serves on various boards and committees, including the advisory board of the V&A Museum of Design Dundee in the UK and Creative Industries Fund in the Netherlands. 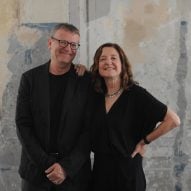