British photographer Rory Gardiner took these shots of Christ & Gantenbein's angular concrete extension to the National Museum Zurich when it was bathed in late winter sunlight.

Gardiner visited Zurich in early March to shoot the new wing Christ & Gantenbein designed for the museum, which houses the largest collection of cultural and historical items in Switzerland.

The Basel architecture practice selected raw concrete for the extension, which opened last summer, to juxtapose the stonework of the existing museum building planned by Swiss architect Gustav Gull in the late 19th century.

The extension, which houses new galleries, an auditorium and a library, affixes to either end of the old stone building to enclose a courtyard.

A jagged cutout in the base of the concrete structure creates an opening to allow visitors to enter the courtyard. Gardiner's images capture dramatic shafts of sunlight and shadow on the underside of this opening, which dwarfs the figures in the shots.

"I'm always looking to make images that illustrate the human experience of that project at that time. The winter light in March gave the materiality a beautifully sombre tone," Gardiner told Dezeen.

"The building is unusual in that it's not particularly heroic from a distance, but the plan offers some quite intimate moments with scale once you get up close to the bridge and courtyard," he added.

"I also love the delineation from the existing structure that still compliments rather than overpowers the original project."

Gardiner used two medium-format cameras – a Mamiya RZ67 and an Arca Swiss – and Kodak Portra film to photograph the project.

The combination of the light and film choice lend the shots a warm tinge.

Gardiner is based in east London.

He has previously photographed the home of British rapper Tinie Tempah for a Dezeen feature, as well as a range of architecture and interiors projects including The Leadenhall Building in London by Rogers Stirk Harbour + Partners and David Chipperfield's Museo Jumex in Mexico City. 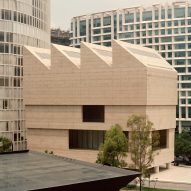