The form of the lighting is a nod to a mineral formation called botryoidal hematite, while the iridescent finish is inspired by soap bubbles.

Li had the idea to produce the Bubbly lights while in the final stages of designing her previous Lina collection, which left a selection of differently sized brass balls in her Brooklyn workspace.

Working with engineer Philip Watkins, her partner at Rosie Li Studio, she experimented with grouping the balls together into varied arrangements.

"These ball clusters brought to mind botryoidal hematite, a globular mineral formation I've always been attracted to, so it was a really exciting discovery," Rosie Li told Dezeen.

"The real challenge was defining an internal logic for this system, as we wanted to strike a balance between organic liveliness and structured simplicity."

The lights are made from polished brass and have a multicoloured metallic finish, chosen by Li to mimic the iridescent quality of soap bubbles.

To achieve the rainbow effect, the studio worked with a special coatings vendor that could produce highly saturated colours to cover the spherical modules.

Li also used oil-rubbed bronze to create a black version of the lights, and polished nickel for silver editions.

Circular shapes frequently appear within Li's pieces; however, for the Bubbly collection the studio said it was "more interested in creating sculptural lighting, and exploring fresh yet familiar bubble formations not typically seen in traditional lighting design".

The collection is comprised of table lamps, chandeliers, pendants and wall lights, all of which operate using off-the-shelf incandescent globe bulbs. The table lamps include globular on-off switches, in line with the lighting's overall aesthetic.

Li's Bubbly range was first shown at this year's ICFF in New York. Other lighting designs debuted at the fair included Bower's minimalistic C-shaped lamps with spherical bulbs and ANDLight's pendants that look like oversized buttons. 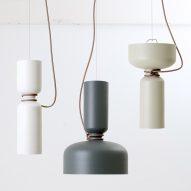