Boldly shaped and coloured designs by Memphis group founder Ettore Sottsass are on display alongside some of the historic artefacts they reference, and contemporary objects they in turn influenced, at The Met Breuer museum in New York.

Organised by curator Christian Larsen, the exhibition brings together work spanning the late Italian architect and designer's 60-year career – including furniture, machines, ceramics, glass, jewellery, textiles, paintings and photography. These are presented beside pieces old and new from which Sottsass adapted forms, colours and patterns into his unique style.

"The exhibition will present Sottsass' work in dialogue with ancient and contemporaneous objects that influenced his practice," said the museum. "This juxtaposition will offer new insight into his designs, situating him within a broader design discourse."

Sottsass was born in Innsbruck and educated in Turin, before establishing his studio in Milan in 1947. The designer spent a long period as a consultant for Italian company Olivetti, creating functional machines and early computers, but his style evolved to become more playful – as seen in products like the iconic 1969 Valentine typewriter.

"By the 1960s, Sottsass began to move away from his own modernist beginnings in favour of qualities beyond the functional: he created objects imbued with symbolism, emotional appeal, and global and historical references," the museum said.

He is perhaps best known for founding the Memphis collective of designers in 1980. Based in Milan, the group responded to modernism with playful shapes and hues, leading to an association with postmodernism.

The Memphis style crept back into favour in 2014, when original designs were reissued and new interpretations were created.

The defining product from the collective's output remains Sottsass' Carlton bookcase, which is presented as part of the exhibition at The Met Breuer.

Highlights in the Sottssass exhibition include five ceramic totems, which the designer created in 1965–66. as part of his Menhir, Ziggurat, Stupas, Hydrants, and Gas Pumps project. A variety of smaller 1960s ceramic vases are displayed next to ornate mandalas that Sottsass abstracted for the designs, following a visit to India.

In the final section of the exhibition, Sottsass' later work is compared with pieces by 20th-century artists and designers Piet Mondrian, Jean Michel Frank, Gio Ponti and Shiro Kuramata – all who equally used abstracted shape and colour.

The exhibition runs 21 July to 8 October 2017 at The Met Breuer, which opened last spring in the Marcel Breuer-designed building on Manhattan's Upper East Side. Formerly home to the Whitney museum, it was renovated by Beyer Blinder Belle, and now houses a restaurant and coffee bar on its lower level. 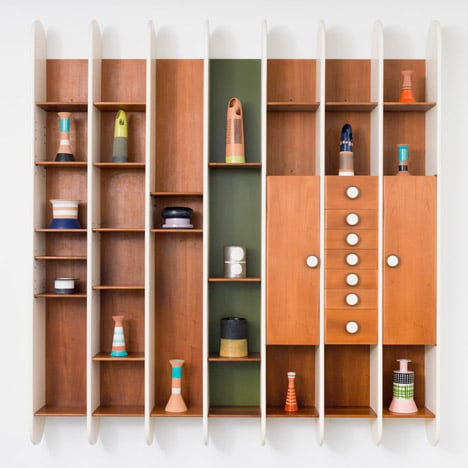 Photography is by Anna-Marie Kellen, courtesy of The Metropolitan Museum of Art.