Rolls-Royce has unveiled a new version of the car it bills as the "greatest luxury item in the world", which now includes specially commissioned artwork in its interior.

The eighth-generation Phantom features a dashboard panel fashioned from a single piece of glass, allowing three-dimensional artworks of various materials to be installed behind it. Rolls-Royce calls this feature The Gallery.

"The Gallery is an innovation that furthers Rolls-Royce's unparalleled bespoke capabilities," said the car brand's CEO Torsten Müller Ötvös. "Patrons are now invited to commission artworks for their own personal Gallery within Phantom, in essence, bringing art, within art."

Phantom cars are already highly customisable, and the company says its buyers increasingly tend to be collectors of fine and contemporary art.

When purchasing their Phantom, they can now commission work such as a custom 3D-printed stainless-steel and 24-carat-gold panel by German product designer Thorsten Franck, who promises to distill each customer's character into a unique algorithm to create variations in the pattern.

Alternatively, they can choose a ceramic creation based on roses exclusively bred for Rolls-Royce and crafted in ultra-fine porcelain by Bavarian manufacturer Nymphenburg, or a sculpted silk appliqué by British artist Helen Amy Murray, inspired by Rolls-Royce famous hood ornament – a woman leaning forward with cloth billowing behind her.

The artworks sit around the instruments in the dashboard of the Phantom, a luxury vehicle Rolls-Royce has been making since 1925.

In addition to its artistic credentials, Rolls-Royce is touting the vehicle as "the most silent motor car in the world", with two layers of six-millimetre glazing and more than 130 kilograms of sound insulation through foam and felt.

The car is also designed to make its occupants feel cocooned through "The Embrace", a feature that closes the doors automatically at the touch of a sensor. Rolls-Royce suggests this sensor can be triggered by an assistant, valet or driver themselves.

The idea of The Embrace guides Rolls-Royce design director Giles Taylor's approach to interiors, which are meant to feel like a calm sanctuary with technology hidden away until needed.

Inspiration also comes from Charles and Ray Eames' iconic 1956 Lounge Chair, which is referenced in the wood panelling on the back of the front seats.

Externally, the car is designed to have as few visible joins as possible and appear like a solid block of aluminium. Its front grille, known as the Pantheon because of its shape, has been raised higher than before, in a move supposedly inspired by last year's concept car, the Vision Next 100.

While Rolls-Royce has been a name in luxury cars and aero engineering since 1904, in its current iteration it is a wholly owned subsidiary of German brand BMW, which acquired the rights to its trademarks in 1998.

"The global introduction of a new Rolls-Royce is always a very special moment within the BMW Group," said BMW chair Peter Schwarzenbauer. "This particular occasion is all the more special because we are introducing an all-new Phantom, the flagship of the Rolls-Royce brand and the world's foremost luxury product."

Prices for the Phantom are thought to start above the £300,000 mark – a relative bargain compared to the one-off £13 million Sweptail that Rolls-Royce unveiled earlier this year. 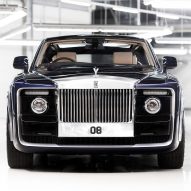