Carried out by Hyperloop One, the frontrunner in the race to realise a transportation system of near-supersonic speeds, the test took place at the company's DevLoop site in Nevada – the first and only full-scale Hyperloop test track in the world.

Installed in a barren stretch of desert, the 500-metre concrete tube allows the Hyperloop One team to accelerate a levitated pod at high speeds in a near-vacuum using its proprietary propulsion and control systems.

The system employs mag-lev — the same technology that is used by high-speed trains in Japan – in which the electromagnetic levitation of the train means there is no friction, unlike traditional trains that run on tracks.

Mounted on 16 wheels that retract as the magnetic levitation takes over, the carbon fibre and aluminium passenger pod measures 8.7 metres long and resembles a bus with beak-shaped nose. The test saw the electric propulsion system apply the equivalent of 3000 horsepower to the pod, which reached a speed of 190 miles per hour (305 kilometres per hour) in about five seconds before safely coming to a stop.

"The XP-1 performed as designed, handling high speeds and levitating in a vacuum tube depressurised to the equivalent of flying at 200,000 feet above sea level," said Hyperloop One co-founders Josh Giegel and Shervin Pishevar on their blog.

"Seeing a 28.5-foot-long and 8.9-foot-tall vehicle propel at high speeds down that track brings the vision of the Hyperloop much closer to reality."

"As you watch these new videos, you can hear the sound of the Hyperloop. That is the sound of the future of public transportation," added the duo, confirming that the pod will continue to be tested at faster speeds and longer distances each time.

The Hyperloop One team estimates that the top speed for a passenger vehicle or light cargo will be 670 miles per hour or 1080 kilometers per hour. That is 2-3 times faster than high-speed rail and magnetic levitation trains, and 10-15 times faster than traditional rail.

Musk, who first unveiled the concept for Hyperloop in 2013, later open-sourced the technology and is no longer directly involved in its development. Hyperloop One is just one of a number of companies racing to create the first Hyperloop.

It has been working with Bjarke Ingels Group on the infrastructure design for a Hyperloop in the United Arab Emirates, the plans for which it unveiled in November. The system is intended to connect Dubai and Abu Dhabi in just 12 minutes.

In June, rival company Hyperloop Transportation Technologies signed a deal with South Korea that will allow the country to use its technology to build a Hyper Tube Express system, and it has also reached an agreement with Slovakia for a Hyperloop system to link the European cities of Bratislava, Vienna and Budapest. Its first full-scale passenger capsule is currently in development, and will be completed and revealed in 2018.

Last month Elon Musk took to Twitter to report that his infrastructure and tunnelling firm The Boring Company had received "verbal government approval" to build a Hyperloop connecting New York and Washington DC.

Ninety minutes later, he tweeted: "Still a lot of work needed to receive formal approval, but am optimistic that will occur rapidly".

Later that day the Guardian reported that several city, state and federal spokespeople all concurred that the Tesla CEO has not received permission to build the east-coast Hyperloop. A White House spokesperson, however, confirmed that officials had had "promising conversations" with Musk and executives from the Boring Company.

Other companies working on Hyperloop systems include TransPod in Canada and AECOM and Arivo in the USA. 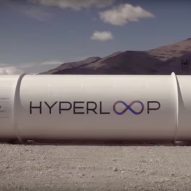