Park, a product and furniture designer, developed the three-piece Happy Napping collection as one of her final projects at Kingston.

Described by Park as a set of "napping equipment", it features the Doughnut Jumper, Inflatable Scarf and Pillow Hat.

"Happy Napping started from riding on London's public transport and observing the behaviours of the sleepy commuters and tourists," she said.

The Doughnut Jumper has two circular shapes on the chest. These plush sections make it easier for couples to nap on each other, giving them a soft place to rest their head.

The Inflatable Scarf can be lifted over the head and inflated when needed, while the the Pillow Hat – described by Park as a "new archetype of the common beanie" – is surrounded by a squishy layer to give wearers a padded layer when leaning their heads against a window or seat.

Park says her work is inspired by daily rituals and always aims to make "people's lives easier". Her design process often begins with observing human behaviours and habits before figuring out how to enhance or improve them.

"My design ideas and inspirations have always been found through personal observational findings, especially looking at people's behaviours, and from this I focus on how to improve people's lifestyles," she said.

"One of my final-year projects was inspired by people napping and the different positions and places they nap," she added. "Everyone had their own pattern, leaning on a window during a bus journey or a power nap at a work desk."

Designers are becoming increasingly interested in products to aid sleep. Fellow graduate Lena Saleh created a set of objects for people to look at before bed instead of their smartphones, industrial designer Yves Behar recently made sleep-promoting headband Dreem, and a team from TU Delft developed the gently "breathing" Somnox pillow for insomniacs to cuddle as they drift off. 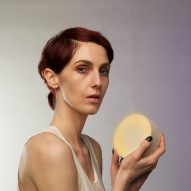