Auto-maker Ford has dabbled in the world of home furnishing with the Lane-Keeping Bed, which promises to help couples get a better night's sleep.

The smart bed can identify when a "selfish sleeper" has rolled onto their partner's side of the mattress and act to put them back in their place.

The smart bed borrows a technology from Ford's cars called Lane-Keeping Aid. This feature monitors road markings ahead of the vehicle and "nudges" the steering wheel in the opposite direction if it senses the driver is veering too close to another lane.

In the Lane-Keeping Bed, the mattress contains pressure sensors that can identify when a sleeper has crossed into their partner's side of the bed.

Like a human-size conveyer belt, the mattress revolves to shift both the sleepers back into a position where they both have an equal half of the bed. 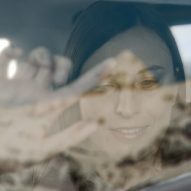 Ford said its invention would help people in relationships whose sleep was effected by the tumultuous snoozing style of their partner.

"When sleeping together, many couples each have less space than a small child has in a single bed," said Stanley. "Humans are most vulnerable when sleeping, so we're programmed to wake when something or someone touches us unexpectedly."

"If someone moves onto your side of the bed this defence mechanism will kick in and you'll have a broken night, often while they continue to sleep soundly."

The prototype bed is part of Ford's Interventions series, which applies the company's automotive experience to help solve everyday problems. It's also a promotional exercise to bring consumers' attention to car features they may have overlooked.

"Lane-Keeping Aid in our cars can make driving easier and more comfortable," said Ford of Europe marketing communications director Anthony Ireson. "We thought that showing how similar thinking could be applied to a bed would be a great way to highlight to drivers a technology that they might not previously have been aware of."

With poor sleep linked to to health problems as wide-ranging as obesity, heart disease and diabetes, there has been increased interest in rest-promoting design.

The Dreem headband by Yves Behar tracks sleep and promotes deeper rest through sound, while Nokia's sleep tracker adjusts the lighting and temperature before you get out of bed. For the anxious, the Somnox huggable pillow "breathes" to soothe users to sleep.