A group of students from the Copenhagen Institute of Interaction Design have used a vintage telephone to create a screen-free experience of the internet.

Designed to make the "intangible processes of the internet tangible", the Internet Phone lets users "call" websites using a traditional rotary handset – which requires each digit to be selected with the turn of a wheel.

The dial is used to input the 12-digit IP address – found in an accompanying Yellow Pages-style phonebook, which includes descriptions of each site. A robotic voice then reads aloud from the website through the phone's receiver.

"Each step in the user process is comparable to that a browser takes when retrieving a website," explained the team, which was made up of James Zhou, Sebastian Paul Hunkeler, Jens Skoug Obel and Isak Frostå. The phone was created as part of the institute's Physical Computer course.

"Looking up the IP addresses in a phone book is similar to how a browser gets an IP address from DNS (Domain Name System) directories," the students said. "Dialling the twelve digits and waiting for the phone to retrieve the HTML content mimics how a browser requests data from servers."

"The voice-to-speech reading of the website is comparable to how a browser translates HTML and CSS code into human-understandable content."

To recreate the loading process, the Internet Phone has been programmed to periodically tell users: "Your page is loading, please hang up. We will call you back."

To make the phone, the team connected an Arduino micro-controller to its original circuitry, and wired up the receiver, bell and dial to function as basic inputs and outputs.

The Arduino records input from the dial, reformats it to an IP address and retrieves the HTML data. This is then parsed, and the data sent to a speech synthesiser.

"We were excited about the rotary phone as an artefact," the team's James Zhou told Dezeen. "We like the springy push-back of the rotary dial against our fingers, the clicking of the switchhook when we slam down the receiver, and overall sturdiness of the body. These are all physical interactions that the internet lacks."

To mimic the usual experience of being online, the team also created a set of giant tokens – article, developer, incognito and history.

These are activated by unscrewing the receiver's microphone cap, and placing one inside. They change how the phone behaves – for example, reading the HTML content if in developer mode, or recalling the last five pages visited in history mode.

"We are living in a world where the internet and connected devices have become ubiquitous," said Zhou. "But the excitement around connecting to websites and other people has disappeared. We wanted to bring some of that back."

The team showed the Internet Phone at the Copenhagen Institute of Interaction Design, and also put it on display at the city's Langelinie Harbour.

While it was on display, the team were surprised by the number of people who didn't know how to use a rotary phone but also by the nostalgia from those who used to own one.

"People were delighted, surprised and maybe a little weirded out," added Zhou. "There is a magical moment when the computer voice narrates back the website. Because it is an unconventional way of accessing the internet, most people were curious about how it works."

The Smell of Data fragrance is a similar attempt to create a tangible interpretation of the internet. The grenade-shaped diffuser would release scent to alert users to data leaks from their smartphones, tablets and computers. 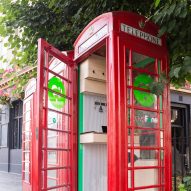