This remotely controlled undersea robot has been designed to reduce numbers of rapidly reproducing lionfish by capturing them for food.

The device – which was created by non-profit Robots in Service of the Environment – received over $29,000 in backing on Kickstarter, and is currently being tested by the team in Bermuda.

It is designed to tackle ever-increasing numbers of lionfish, or pterois, which is native to the Indian and Pacific Oceans but has spread, perhaps as a result of being dumped by aquarium owners.

The fish reproduce extremely rapidly, spawning around 2 million eggs each year, and lack their own predators as a result of their venomous spines.

They are also indiscriminate predators, eating prey up to half the size of their own bodies. As a result the species is threatening fish stock, and damaging reefs.

The Guardian LF1 was created as an affordable and humane solution to the problem. It can dive down to the 400 feet needed to catch lionfish, and also hover around reefs to protect them.

Operated remotely, the robot – which costs less than $1,000 – is powered by eight thrusters and includes cameras and lights that let the user identify nearby lionfish. A pair of electrodes can then be used to apply a small electric current to the water near the fish to stun it.

It's then suctioned into a container, which can hold up to ten lionfish before it needs to return to the surface.

"Lionfish are a formidable threat to the fisheries and reefs in Bermuda and throughout the western Atlantic," said Sylvan Richards, Minister of the Environment, Bermuda Government – which supported development of the robot.

"Working with RSE to innovate this unique solution allows us to extend our stewardship of Bermuda's biodiversity to areas we cannot easily each, and help other jurisdictions facing the same problem."

Established in 2015, RSE develops projects that use robots to solve environmental issues – with the Guardian LF1 its first effort so far.

Unmanned devices are being experimented with by a diverse range of industries. Designers have created robots that can be used for everything from building houses to finding and fixing pipe leaks. 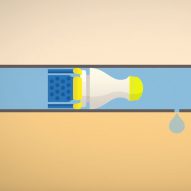 More robots in architecture and design