A large sliding window set into the end wall of this extension to a terraced house in Dublin by Irish practice Architectural Farm is enclosed within a wooden frame that provides internal and external seating.

Local studio Architectural Farm was tasked with renovating the 1920s property and adding an extension that maximises the internal layout while also improving the connection with the small rear garden.

The house is located on St Declan's Terrace in the garden suburb of Marino to the north of the city centre, which was the Irish government's first attempt at local-authority housing in the 1920s.

Having returned to live in Ireland from Switzerland, the homeowners wanted to make the most of the garden, which is a key feature of the original design.

The new addition is a simple rendered block that extends from the rear of the building towards the lawn and is surrounded by a paved patio.

The extension incorporates a large window that overlooks the garden and can slide open to enhance the sense of connection between the indoor and outdoor spaces.

A timber surface that wraps around the recessed opening forms a bench that is divided in two when the window is closed, but becomes a large area for various activities when the glazed surface is pulled aside.

"The bench acts as a seat, a stage, a playground and a social space for its young family, while maximising the space of the rear garden and ensuring a sense of enclosure in the enlarged open-plan living space," said Architectural Farm.

The extension is angled to make the most of the available sunlight and is punctured by a large roof light and a glazed door leading out onto the patio on one side, ensuring the internal space receives plenty of daylight.

In addition to a lounge area close to the window, the ground floor now accommodates a kitchen with a central island and an adjacent dining space lined with built-in storage.

A staircase with concealed storage incorporated into a plinth at its base leads up to the reconfigured first floor, where a double-height landing allows natural light to filter down into the stairwell.

The rooms on the upper storey are arranged off the landing, which also provides access to a converted attic via a space-saving staircase with alternating timber treads.

Photography is by Ste Murray. 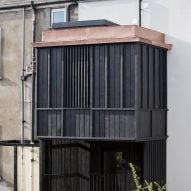 More architecture and design in Dublin