Brickwork panels alternate with gaps up the sides of this housing project in Mexico City, which local firm HGR Arquitectos has organised around a line of patios at the centre.

Named after a leading figure in the Mexican Revolution, the Emiliano Zapata 167 apartment block is located in the sprawling city's south-central Portales Norte neighbourhood.

The cuboid building includes 25 residences, split across five storeys and measuring between 82 and 91 square metres – all accessed by a single elevator and a series of staircases up the eastern facade.

Bricks were chosen as the prominent material by architect Marcos Hagerman's firm HGR Arquitectos. They form alternating panels across two facades, to partially shade the external corridors used to reach the front doors.

The same orange bricks also line the five patios that form the building's core. These divide each of the apartments, so all the living spaces are on one side and private areas are on the other.

Bridges connect the halves on each level, concealed by brickwork lattices in front of sliding windows, which can be opened to provide ventilation. A single tree is planted at the centre of each patio, which can be seen through the windows facing onto the enclosed areas.

"To comply with the 20 per cent of free area that the city requires, five patios are accommodated at the centre of the building," said HGR Arquitectos. "In each patio, a liquidambar tree was planted helping give privacy and better views to each apartment."

Three levels of parking linked by a car elevator are hidden underneath the accommodation. The residences are decorated minimally, with white walls and kitchen units, wooden floors, and exposed brickwork.

" The whole building was designed with natural and durable materials such as brick, volcanic stone and wood," said the studio. "The proposed vegetation is endemic and requires little maintenance." 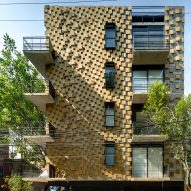