The case study is titled How to design a beautiful TV and was the third in a series of four talks by Dezeen and Philips TV & Sound inviting designers from different disciplines to explore the cutting edge of product design. 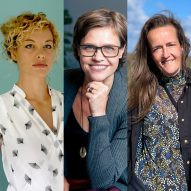 The live case study was moderated by Dezeen's deputy editor Cajsa Carlson and featured a collaborative presentation from the three brands that explored in detail the process of creating the OLED+986 and 936 televisions.

Philips' OLED+986 and 936 televisions feature an inbuilt Bowers & Wilkins soundbar, which is upholstered in a Kvadrat fabric.

The panellists discussed how Philips TV & Sound realised the designs for the televisions by combining its own specialism in manufacturing consumer electronics at scale with Kvadrat's expertise in craft and materials and Bowers & Wilkins' approach to boutique sound design.

The discussion covered the challenges of incorporating premium materials into the design of consumer electronics, as well as what the future holds for the design of technology in the home.

In his role at Philips TV & Sound, an arm of the electronics brand Philips which designs and produces television and audio products, White is responsible for the company's design strategy and direction and leads its design studios in Amsterdam, Taipei and Shenzhen.

In July, White spoke to Dezeen about European design in the first talk of this series. Last year, he also introduced the brand's collection of portable audio accessories with Georg Jensen in a talk as part of Virtual Design Festival.

As vice president of design at Kvadrat, Osther is responsible for the creative arm of the business. In her work with Kvadrat's collections, she collaborates with a wide range of external designers including Patricia Urquiola, Olafur Eliasson and the Bouroullec brothers.

Osther started working at Kvadrat in 2007 in the brand's product development team. She holds a masters degree in textile design from Kolding Designskole, Denmark.

Kerr joined Bowers & Wilkins in its research and development department before becoming its director of product marketing and communications. During his time at the company, he has contributed to every major product the company currently produces.

Bowers & Wilkins was founded in 1965 by John Bowers and Roy Wilkins. The brand's iconic Zeppelin iPod speaker was one of the first devices to utilise Apple’s AirPlay system.

Bowers & Wilkins' audio equipment is used in Apple Stores around the world, as well as George Lucas’s Skywalker Sound studio and London's Abbey Road recording studio. Its speakers are additionally installed in a number of Jaguar, Maserati and Volvo car models.