Spanish architect Rafael Moneo has been named as the architecture laureate for the 2017 Praemium Imperiale, a prestigious art prize awarded annually by the Japan Art Association.

Moneo is one of five winners of the award, which recognises individuals that have excelled in fields not currently recognised by the Nobel Prize: painting, sculpture, architecture, music and theatre/film.

The architect – best-known for projects including the Logrono Town Square in northern Spain and Atocha Station in Madrid – was selected in recognition of his "beautifully designed structures" that "complement their settings while establishing unique identities".

"Spanish architect Rafael Moneo is greatly admired for his design approach, which involves looking at the specific conditions of each location to ensure that his buildings blend effortlessly into the city landscape while at the same time respecting the environment, and establishing a clear identity and a connection to his creative vision," said the prize organisers.

Moneo, 80, was born in Tudela, Navarra, but studied architecture in Madrid, obtaining his degree in 1961. He briefly worked for Sydney Opera House architect Jørn Utzon in Denmark, before being granted a fellowship to study at the Academy of Spain in Rome.

He has since worked on projects both home and abroad, including the Cathedral of Our Lady of the Angels in Los Angeles and the Prado Museum Extension in Madrid, and has already been awarded the Pritzker Prize (1996) and the RIBA Royal Gold Medal (2003).

Current projects include a pair of luxury condo towers for the Miami waterfront. 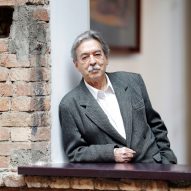