Ten students from Finland's Lahti University of Applied Sciences have designed a collection of essential furniture items for those affected by natural disasters and the ongoing refugee crisis.

The designs are the result of a research project named Rehome, which saw students from the school's Institute of Design tasked with creating temporary products for those who have had to suddenly leave their homes without belongings.

"The main idea behind Rehome was to design temporary products that could provide an answer to humans' primary needs when suddenly rehoused," one of the students, Iida Nordgren, told Dezeen.

Students came up with a list of things that would cater to "the most urgent human needs", which they identified as sleeping arrangements, privacy, and social interaction.

Low-cost materials were used, such as plywood and cardboard. To make the furniture as efficient to assemble as possible, the designers opted for a slotting method – meaning each piece can also be taken down quickly and easily.

Designer Anne Hirvonen's concept for a space divider sees cardboard shapes stacked to form a sturdy partition, and Iida Nordgren's privacy screen can be stretched out length-ways and width-ways to suit the space.

Another space divider, by Samuli Strander, incorporates sections to store away belongings – a concept also explored by Tuuli Latvala with her shelf system.

A number of designers created concepts for different beds. Emma Sivusalo's cot for young children adapts as the infant grows, and Jani Luukkonen's bed can be stacked to solve the issue of space.

Topias Kanto wanted to address the potential lack of privacy when sleeping, so created a cardboard enclosure sealed off by curtains, while Henri Mertanen used plywood to create a bunkbed to sleep two people. Jussi Alanen designed a simple single bed, using cardboard.

Rosa-Maria Tolvanen recognised the importance of eating together, so created a dining table and set of stools.

While the designers created these pieces with displacement in mind, they also believe they could serve a purpose at festivals and campsites.

Each of the 10 pieces are on show at this year's Helsinki Design Week, which takes place until Sunday.

The refugee crisis has become an increasingly important topic for architects and designers, given the worsening of the situation over the past few years. 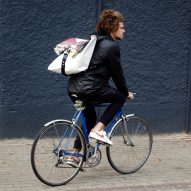 10 of the best designs that address the refugee crisis

A shelter developed by IKEA's charitable arm IKEA Foundation brought the needs of refugees into mainstream design, and went on to win the Design Museum's design of the year award in 2016, while Yara Said – an artist and Syrian refugee now living in Amsterdam – created a flag for the refugee team at the Rio 2016 Olympics.