The French artist designed the installation for Broadgate's Exchange Square, which is located behind the station in the City. Her aim was to add fun to the daily routine of commuters who pass the square each day, or those who relax on the steps facing at lunch time.

"I just imagined people working in the city maybe they are a bit stressed so the idea was to do something where they can just come and hang out," Walala told Dezeen.

"Originally I wanted to do like a big, giant stress ball because I just thought that if people want to come and they just wanted to have a relaxing time and just squeeze something," she added. "I wanted to do something quite soft."

Villa Walala is reminiscent of childhood bouncy castles, although it doesn't feature an inflated base.

Instead, the passersbys are invited to walk through one of its four archways and touch its giant soft shapes. Four inflatable totem-like structures mark the corners of the grassed square.

Typical to Walala's style, the vinyl material is patterned with a mix stripes, circles and blocks, in a total of seven different colours. It took 1,200 square metres of vinyl to create the installation.

Prints are also extended to cover the surrounding paving and adjacent steps in a mix of monochrome stripes, and colourful diagonals.

Walala graduated with a degree in textile design from the University of Brighton in 2009 before setting up her eponymous studio in east London.

Earlier this year, she used her signature colourful style to create a labyrinth inside London's Now Gallery. Her other projects include covering a building in Shoreditch with prints and designing a collection of Memphis-inspired homeware.

Walala's Villa Walala is one of the Landmark Projects of this year's London Design Festival, which runs from 16 to 24 September 2017. Sam Jacob and MINI have teamed up to create the other – a micro home with attached library. 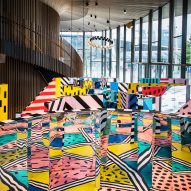 Photography is by Andy Stagg unless stated otherwise.