A blushing desert rose or postmodern eyesore? Readers are arguing over the sculptural form of Jean Nouvel's National Museum of Qatar in this week's comments update.

Rose-tinted: as Jean Nouvel's National Museum of Qatar nears completion in Doha, readers are scrutinising its form, which comprises a cluster of linked pavilions intended to resemble desert crystals.

"An insult to actual desert rose clusters across the country," wrote user dcbzyxkji, while Ex-basler said that Qatar should ask for a refund. "So Abu Dhabi got a masterpiece and Qatar got this?"

Several readers described the structure as postmodernist in style. "Wicker Basket Building'esque, and who thought that PoMo was NoMo?" said Chris.

"Nothing more than a baroque exercise in computer tyrannised form-chasing," said regular commenter HeywoodFloyd. "It is basically postmodern in its disdain for specific functionality, structural representation, or coherent registration on the exterior of any interior spatial organisation."

"Architecture is neither nature nor natural. To copy the natural form as it is, is the lowest degree of architectural thinking," wrote noname.

Some readers had more complementary words:

What do you think of Jean Nouvel's National Museum of Qatar? Let us know in the comments ›

Brexhausted: Katharine Hamnett has designed T-shirts urging the UK to "Cancel Brexit" – and the ensuing comments highlighted tensions between Remainers, Brexiteers and those who just want the UK to get on with it.

Atlas felt the designs rejected the referendum vote. "So basically, they are are T-shirts with anti-democratic slogans and misleading quotations printed on them? It's not exactly a new Hockney work is it?"

"Everybody has the right to convince others of their ideas," replied a user called Continental. "If that leads to changing previous political decisions, then it's not undemocratic but in fact democracy in full swing."

"Here's how I see it from the other side of the pond: time for you all to move on," said HeywoodFloyd.

H-J summed up the mood:

Watershed: readers are coveting garden workspaces after we published this backyard studio that the founder of architecture firm Six Four Five A built for himself.

"He is living the dream," said Alejandro, referencing the current trend for garden studios across Brooklyn. "An oasis in a brownfield," added Paul.

But not everyone was ready to ditch their office. "The glare and temperature levels in this shed are perhaps suitable for storing the lawnmower, but they are not a good working environment by any measure," wrote Rosenbaum.

One reader questioned whether the architect had prioritised style over substance:

Driver's seat: a levitating bubble-shaped vehicle has been named winner in a Renault student competition to find the "car of the future" – but readers aren't ready to become early adopters.

Some commenters were confused by the vehicle's unusual shape. "So the future of cars is a train?" said Bubblewrap. "Or robot balls?" quipped user AMDcb500.

Spadestick was more concerned with the practicalities of the design. "How do you get in? Any fool can come up with whimsy – but it takes a true genius to execute this elegantly," he wrote. 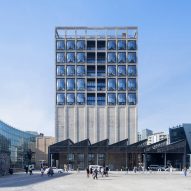