He will work now alongside Airbnb co-founder Joe Gebbia to oversee projects carried out by Samara – an internal studio within the Airbnb company that focuses on architecture, service design and software engineering projects.

"His industrial design expertise and business acumen will be a valuable asset to the studio," he added.

Waterfall graduated from London's Royal College of Art in 1996 with a masters in industrial design. As well as his personal ventures, he was previously creative director of tech company Intel Media – which saw him develop the brand's identity across all its services.

According to Waterfall's Linkedin page, he has been creative director at Samara since July 2017.

Named Yoshino Cedar House, the structure was designed to host a community centre on its ground floor and traveller accommodation in its gabled roof.

"The mission of this new internal design studio is to develop services and ideas that extend Airbnb's values and vision into new areas," said Airbnb, in a statement when Samara launched last year.

Gebbia founded Airbnb with Brian Chesky and Nathan Blecharczyk in 2008. The company, which ranked at number 79 on the inaugural Dezeen Hot List, was recently valued at $31 billion. 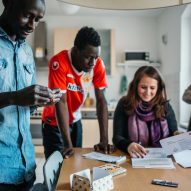 Recently, Airbnb has ramped up its humanitarian efforts in light of various crises happening across the world.

In June, the company harnessed its vast network of short-term home rentals to create a new platform providing housing for refugees named Open Homes, which is the key project to come out of its new in-house humanitarian team led by designer Cameron Sinclair.