New York studio Bureau V has attached a spiky-backed snug and a fabric-covered galley kitchen to a prototype micro home, which is on show in Brooklyn.

The second iteration of MINI Living's Urban Cabin project is installed in the courtyard at creative venue A/D/O in Greenpoint.

Created as a model for a tiny living space, the timber structure is designed to house up to two people, and to be added to in various ways by different designers and architects around the world.

In each guise, it is intended to "offer a solution to the modern challenges of urban living in the form of a micro-living, shared-housing concept", said the MINI Living team.

Following Sam Jacob Studio's customisation of the structure shown during last month's London Design Festival, Bureau V was also asked to create an experience room and a kitchen for the home.

The studio's design is specific to New York City, where living spaces are becoming increasingly compact and the population is growing more diverse.

Given the seriousness of the current political climate, the studio wanted its additions to be comfortable and playful. Therefore for the experience room, the firm created an "aggressive" shell formed from bright yellow metal spikes on the outside.

Inside, the raised cocoon-like space is lined with padded upholstery to create a soft, cosy and welcoming snug.

"If you think about what journalism is doing in terms of a lot of the political issues, it's using humour as this way to get them across," Bureau V founding partner Peter Zuspan told Dezeen. "The late night talk shows, and things like the clown protest against Neo-Nazis."

"We were trying to think of ways that humour can take the aggression out, hence the kawaii colours and playfulness," he added.

The kitchen area is equally whimsical, sheltered by an arch of quilted material that is blue on the top and metallic underneath.

"We were thinking a little bit to the shiny New York diner and the gallery kitchen," said Zuspan. "But then we really turned it upside-down, flipped that material arrangement, built it out of this big soft thing."

The prototype home also has a library of books, which are hung from the ceiling on counterweights, and comes with a reading chair and a yellow anorak.

An angled section at the end, housing a hammock and a wall of plants, also swings open to create more space. Iridescent panels are affixed to the outside of the wooden structure to create translucent walls.

All of the plush elements were created in collaboration with New York studio Print All Over Me.

A/D/O, which is backed by car brand MINI, opened inside a converted industrial building at the beginning of 2017. It has since hosted a clay-extrusion factory set up by UK collective Assemble and an interactive exhibition designed by New York studio PlayLab Inc. 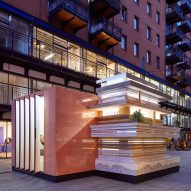 The Urban Cabin will on view to the public at A/D/O from 6 October to 22 November 2017, during which a series of events and workshops based around the project's theme will take place.

MINI Living is an ongoing programme launched by the car brand in 2016, showcasing architectural solutions for future urban living spaces.

This year, the Dezeen x MINI Living Initiative is exploring some of these possibilities through a series of movies.

Photography is by Frank Oudeman/OTTO.