A pyramidal turfed roof tops one of several teaching and administrative spaces clustered around a multipurpose hall at this school in the Belgian city of Knokke-Heist by Amsterdam studio NL Architects.

The Scholencampus De Vonk was designed by NL Architects to accommodate the merger of two primary schools in the Flemish coastal city.

The building comprises five distinct but connected functional zones, with a primary school, nursery school, offices and a multipurpose block housing a refectory and after-school care all branching off from a central multifunctional sports hall.

A colonnade that extends around most of the building provides a sheltered transitional space between indoors and outdoors, and each of the rooms has direct access to the surrounding gardens and playgrounds.

The main hall at the heart of the school is intended as a flexible space that can be used throughout the day and sometimes into the evening for various purposes.

"The hall can perform as a square – a meeting place, a theatre, a room for ceremonies and festivals," said the architects. "The hall is a hub: it will form the connection between the different functions of the school."

An arcade that extends around the sports hall helps to distribute children and visitors around the building. Circulation designed as a series of loops rather than dead-end corridors always leads people back to the central area.

A deep wooden wall lining the multipurpose hall incorporates cavities that can be used for playing or studying, as well as porthole windows providing views into the hall. One side is also built out to accommodate changing rooms and storage.

The main hall required greater height than the surrounding spaces, so a band of clerestory windows topped with a metal roof projects upwards like a lantern above the rest of the building.

The outer zones arranged around the hall are placed on foundations sunk into the ground to reduce the overall height and create a more modest, inviting impression for the school.

Lowering the floor level results in a window sill at the level of the ground outside, which can be used as an additional table surface for working, playing, storage or display.

Three steps connect the classrooms with this ledge and double doors that open onto the surrounding colonnade and gardens.

Due to the positioning of the various rooms off the central hall, the gaps between them create outdoor spaces that can be used for varying functions, including a park, playground, kitchen garden, sports pitch and public square.

A nursery school at one end of the building contains rooms arranged along either side of a wide central corridor that functions as an extension of the classrooms and connects with a bubble-shaped playground.

The largest of the outer blocks contains a primary school comprising a series of classrooms positioned around an enclosed courtyard. The circulation space is lined with wooden storage and windows looking into the classrooms.

A central structure containing further storage areas and toilets has niches carved into its outer edges that transform parts of the surrounding corridors into potential workspaces.

A set of stairs on one side can be used as a presentation space. The stairs lead up to a computer lab housed beneath a pyramidal roof with a skylight at its apex.

The tent-like roof is covered with a layer of planting to encourage biodiversity and lend the structure a natural appearance that emphasises the building's ecological credentials.

The school was required to meet the highest standards of environmental efficiency. To this end, the pyramidal roof helps to extract warmed air and the roof of the colonnade protects the glazed external walls from unwanted solar gain.

Concrete ceilings throughout provide a thermal mass that traps cool air overnight to limit the need for artificial temperature control.

NL Architects and XVW Architectuur picked up this year's Mies van der Rohe Award for renovating a run-down 1960s apartment block on the outskirts of Amsterdam.

The studio's previous projects also include a housing block in Amsterdam with an undulating roof covered in colourful plants, and a station waiting area in the town of Barneveld featuring glass walls and a cantilevered roof. 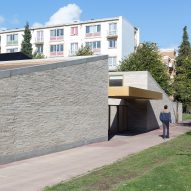