Glazed mint-green bricks alternate to create a basketweave pattern across the walls of this school building by Areal Architecten, which also frames a series of terraces and covered play spaces (+ slideshow).

The Antwerp studio added the block to provide extra classrooms and a multipurpose hall for an existing primary school in the Belgian town of Boom.

The small green glazed bricks cover the building's prefabricated concrete structure. Each one has a four-striped surface, and they are arranged both horizontally and vertically to create the effect of a woven pattern.

"A functional volume with a unique and recognisable design casts itself as a catalyst for [an upgrade of] the whole school environment and the neighbourhood," said the architects.

The school is set on a narrow plot, and the only available building space for the extension was the playground.

To preserve as much of this outdoor play space as possible, the architects stacked the elements one on top of the other – with the hall sandwiched on the first floor between two sets of classrooms on the ground and second levels. 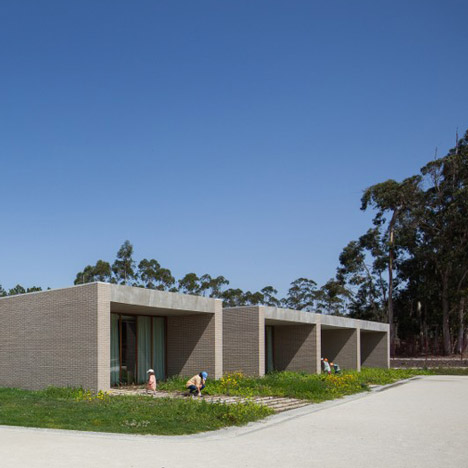 Two classrooms for children aged between three and six flank a broad thoroughfare at ground level, which doubles as a covered play area.

On the upper levels, a pair of generous terraces are set alongside the hall and classrooms for older children, up to the age of 12. They are linked by an external staircase, which is revealed by cutaways in the brick facade.

"The aim was to create an open school with a generous message to the neighbourhood, and one of the important elements of the design was the search for an appropriate balance between built and open space," said the architects.

"The building gives birth to a sequence of spaces in- and outside in a continuous movement from the ground up."

"The extension does not position itself as an autonomous volume that draws a hard line with its surroundings, but forges smooth transitions from outside to inside and mediates between two playgrounds," they added.

Internally, the classrooms are finished with white cabinetry and speckled beige floor tiles.

Thomas Cols Chris Eeraerts and Barbara Morisse founded Areal Architecten in 2006, and together have designed buildings including a brick and concrete townhouse near Antwerp and a retirement home arranged about a pair of courtyards.