Danish firm 3XN has revealed its design for a 153-metre-high apartment building in Toronto, including a dual-level glazed plaza to host public events in the local area.

Retractable glazed walls surrounding the plaza will open onto a prominent corner of the Canadian city's Church and Wellesley district, known as the hub of its LGBTQ (Lesbian, Gay, Bisexual, Transgender, Queer or Questioning) community.

The architecture practice formed the design for the two-storey public space following a series of sessions with locals. It was decided that it was necessary to provide a space to host activities and events, such as the city's annual Pride Week celebrations – the largest in Canada.

Auditorium-style seating will face a stage on the ground floor, as well as form a large staircase to the first floor. This top level will also host social activities and provide views across the surroundings.

"We took a radical approach to the design process by engaging the community in at the earliest opportunity," said 3XN co-founder Kim Herforth Nielsen. "In fact, this was before our team had even started to sketch ideas."

"Inviting the public into the design process proved to be a powerful resource and have made significant contributions to the project we couldn't otherwise have achieved," he added.

"After the first meeting with the community it was clear to us that we had to design something that could animate the corner of Church and Wellesley. We therefore took a bottom-up approach to designing a high-rise focusing on how we could give something back to the city."

Designed for Canadian developer One Properties, the 43-storey-high Church and Wellesley tower follows a slew of large-scale projects in Toronto.

Earlier this month, Hariri Pontarini and Pinnacle unveiled its proposal for a tower trio on the city's waterfront and Foster + Partners announced that had began work on a skyscraper set to become Canada's tallest. Proposals by Henning Larsen, BIG and Frank Gehry are also at various stages in the city.

While the base of 3XN's tower will host public activities, the upper levels will be occupied by rental apartments. The architects have separated this upper structure into four blocks of different sizes, which step back from Church Street to create garden terraces on the eighth, 13th, and 19th floors.

This staggered facade will move the massing of the tower away from the commercial street and its low-level retail developments. A straight vertical facade will face Wellesley Street, similar to the other tall buildings found around Downtown Toronto.

Metal panels will clad the exterior of the tower, but will be punctured by large windows and terraces belonging to each of the apartments.

The homes will have their own kitchens, but occupants will also have access to larger communal lounge, kitchen and dining room to host gatherings with friends, or socialise with other residents. Other communal amenities include a theatre room, saunas, a gymnasium and yoga studios.

Herforth Nielsen founded 3XN in Aarhus, Denmark in 1986, along with Lars Frank Nielsen and Hans Peter Svendler Nielsen. The firm now has offices in Copenhagen, Stockholm, New York and Sydney.

Church and Wellesley, which is slated for completion in 2021, marks its first commission for a high-rise building in North America, while projects elsewhere include a tower in Aarhus that will be almost as tall as the Danish city's cathedral and plans for an aquatic centre in southern Sweden. 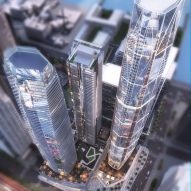