Frankfurt is bidding to woo banks from London by building dozens of new high-rise towers by architects including BIG, UNStudio and Ole Scheeren.

With Brexit threatening London's status as Europe's leading financial centre, Germany's business capital has been promoting itself as a lifestyle destination.

Shiny new towers were being marketed heavily at the Expo Real property fair in Munich last month, with agents reportedly claiming that many London-based banks had discreetly snapped up space.

Proposals on show included a state-of the-art office block by BIG, a cluster of four high-rise towers by UNStudio, and a luxury apartment block that Buro Ole Scheeren is creating in a transformed 1970s tower.

With Brexit negotiations stalling, developers are understood to have rushed their projects forward to capitalise on an expected exodus from London.

According to Skyline Atlas, a website tracking Frankfurt's development, there are 19 high-rise buildings under construction in the city, and a further 26 planned.

Frankfurt lacks the cultural and lifestyle attractions of London as well as continental rivals such as Paris and Amsterdam, but is now working hard to become more appealing to high-spending financial workers.

Markus Frank, a councillor representing Frankfurt at Expo Real, said the city was trying to shake off its dull image by encouraging more lifestyle-driven developments.

"The separation of work and life is a thing of the past," said Frank."Property developers are reacting to the new definition of work-life balance."

"The high dynamics within the city are reflected massively in our Expo Real appearance this year – Frankfurt am Main is boom town!" he added.

UNStudio's plans for Frankfurt exemplify this shift. On a site that was formerly occupied by Deutsche Bank, the Dutch studio plans to create"a city for all", bringing together offices, apartments, hotels, shops and restaurants.

The scheme includes four skyscrapers, rising up to a height of 228 metres. According to UNStudio, it will create homes for 1,000 people, and jobs for at least 3,000 people.

"The project will play a pioneering role in the transformation of Frankfurt's banking district into a mixed-use quarter," said city councillor Mike Josef. "This will become a lively neighbourhood, not only for working but also for living."

"Bringing a mixed-use project into this financial district will not only enliven the area during the daytime, but it will also introduce evening programmes and create an essential form of social sustainability to this part of the city," added UNStudio principal Ben van Berkel.

Similarly, local firm Cyrus Moser Architekten has just been commissioned to create a new mixed-use quarter in Senckenberg, northeast of the city centre. Its scheme includes two high-rises – one for offices and another for residential.

"It is essential now to appreciate the quarter as an ensemble in which every module has a specific task to fulfil," said the design team.

Frankfurt am Main, usually known as Frankfurt, is Germany's fifth biggest city. Unlike Berlin, Munich, Cologne and Hamberg, which are all occupied by over a million people, Frankfurt has a population of just 732,000 – giving it plenty of room for growth.

Despite that, the city is the seat of the European Central Bank and the German Federal Bank, Bundesbank. It is also home to Europe's third-largest stock exchange, behind only London and Euronext, which is the EU's multi-city stock exchange.

As a result, Frankfurt has been named as the city that many international banks with London headquarters are relocating to, following the UK's vote to leave the European Union.

Morgan Stanley and Standard Chartered are believed to be moving their headquarters to the German city. Meanwhile Russian bank VTB, Woori Bank of South Korea, and Japanese institutions Daiwa, Sumitomo Mitsui and Nomura are all reported to be planning Frankfurt expansions.

New buildings intended to cater to these new tenants include the BIG-designed Omniturm, a 45-storey tower backed by developer Tishman Speyer. Omniturm will feature 44,000 square metres (475,000 square feet) of lettable office space, but will also contain apartments and restaurants.

The developer is marketing it as the "first genuinely mixed-use tower in Germany".

"By gently shifting the floor plates of the simple elegant volume, the tower incorporates all the elements of a real city: spaces for living and working, inside as well as out," said BIG founder Bjarke Ingels.

"The shift at the hip will be a sign that new life has infiltrated the cluster of corporate headquarters in downtown Frankfurt."

Frankfurt is not the only city that is vying to capitalise on the exodus of trade from London. Paris has been doing its bit to promote post-Brexit business, with plans for seven new skyscrapers in the La Défense district. Dublin and Amsterdam have also been named as upcoming trade centres.

But the German city is shaping up to be the biggest winner. According to research from financial publication Bloomberg, at least 3,000 UK jobs will move to Frankfurt. In addition, Goldman Sachs CEO Lloyd Blankfein has hinted that his company will follow suit. 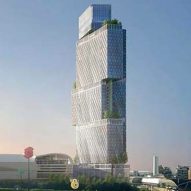