Marble tables, coloured glass vases and bowls, and mirrors with concrete bases are among pieces by design studio Objects of Common Interest on show at New York gallery Matter.

Objects of Common Interest designed the pieces for Matter's New Reflections exhibition using Euclidean geometry. Established by Greek mathematician Euclid, the system dictates that angles, lines and shapes be drawn using a ruler with no markings, or a compass.

Forms created by these strict rules can be seen in the Plane Side Table – comprising parallel slabs of marble, with an acrylic top available in either pale yellow or pink – and an accompanying rhomboid candle holder.

"The pieces are an exploration of form that stem from the classic geometries of the ancient world," said Matter in a statement. "Scaled to fit interior spaces, these exercises in Euclidean shapes create the new from the known."

"The result is an array of amalgamated forms in monolithic and composite execution, which span the fluid limits of transparency, material, and form," the gallery team added.

The exhibition also features a new collection of tableware titled Relativity of Color, which includes a vase, a plate, a bowl, a wide cup and a low glass. A coloured acrylic cylinder forms the base of each, while hand-blown glass shaped to suit the different functions is set on top.

Other objects include a trio of mirrors, with circular reflective surfaces made by layering clear acrylic sheets. Concrete stands forms the bases, with one set at a tilt to angle the mirror upwards.

New Reflections is the first show of work in the city by Objects of Common Interest – a design studio founded by New York- and Thessaloniki-based Eleni Petaloti and Leonidas Trampoukis, who also run architecture practice LOT.

The exhibition will be on display from 19 October to 9 December 2017 in Matter's gallery, located at 405 Broome Street in Lower Manhattan.

The design showroom and gallery was founded in 2003 by Jamie Gray, and his team has previously curated a show home at The Standish condominium building in Brooklyn.

They have also set up an in-house brand called Matter-Made, which debuted at this year's Milan design week with a collection of sculptural furniture and lighting by designers including Faye Toogood, Philippe Malouin and Pedro Venzon. 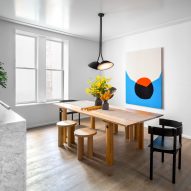 Matter curates show home at The Standish condominiums in Brooklyn

Photography is by Brooke Holm.