MVRDV founder Winy Maas joined a panel of speakers to discuss the relationship between city design and terrorism in this talk, which was the third in our Good Design for a Bad World series recorded during Dutch Design Week.

Winy Maas was joined by German novelist Ingo Niermann, security expert Tinus Kanters and Rotterdam-based architect Marina Otero Verzier to discuss whether the rising threat of terrorism can be solved through urban planning.

Dezeen hosted five panel discussions as part of our Good Design for a Bad World initiative. The talks were free to attend, and took place at the People's Pavilion at KetelHuisplein 1, in the Strijp-S district of Eindhoven.

Other talks include the rising issue of pollution, and the relationship between politics and design. 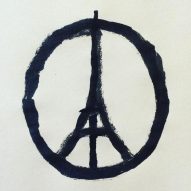 Eight responses to terrorism from architects and designers