The gridded facades of 20th-century skyscrapers by Ludwig Mies van der Rohe, Oscar Niemeyer and Le Corbusier are recalled from memory for this series of prints by Swedish studio Claesson Koivisto Rune.

Each image is made up of hundreds of layers of details created on Adobe Photoshop and Illustrator, and the series took a full-time team of three from the Stockholm architecture and design studio a year to complete.

Studio co-founders Mårten Claesson, Eero Koivisto and Ola Rune said the idea for the series stemmed from their interest in abstract art and its impact on architecture's modernism movement.

"We are really interested in abstract, minimal art," Claesson told Dezeen at the opening of the exhibition, which took place at Tokyo's 360° Gallery.

"It's easy to imagine that architects Mies van der Rohe or Oscar Niemeyer would have been influenced by the works of artists Agnes Martin or Carl Andre. Or, indeed, the other way around."

All but one of the images are presented in landscape format, honing in on the variation in the proportions of the grid of windows rather than the verticality of the towers.

"The grid is all about repetition, proportions and artistic sensibility. The face of the skyscraper is its facade. This is something other than that which it is typically recognised for: its awe-inspiring height and poise," said the studio.

"Most of the modernist skyscrapers were made by architects who were schooled in classical architecture but they did modernism, which meant that when they made skyscrapers [they designed were] basically just floors and then they just put the walls on," he added.

"The only thing they could differentiate from eachother were the grids of the windows. And we became really interested in that – and how good they look in comparison to many new skyscrapers."

Working from memory, some of the details have been tweaked, with elements taken away or added – such as the curtains that dress the windows in the image of the Commonwealth Promenade Apartments, a Chicago tower completed by Mies van der Rohe in 1956.

"We didn't have drawings of the original skyscrapers, we just took the proportions of how they looked, and we have added some new things to them," explained Claesson.

Designart took place 16-22 October 2017. The festival was set up by six Tokyo-based architects, designers and artists in the wake of the cancellation of Tokyo Design Week following a tragic accident.

Claesson Koivisto Rune was founded in 1995 by Mårten Claesson, Eero Koivisto and Ola Rune. Based in Stockholm, the studio's output ranges from products and furniture to interior design.

Recently, the trio created rain-themed interiors for Bergen's Zander K hotel, and designed a collection of disc-shaped lights that are "devoid of unnecessary detailing". 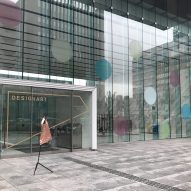 Designart festival aims to "put Tokyo on the map" as a destination for design, say founders