Saudi Arabia has officially recognised a humanoid robot as a citizen, marking the first time in history that an AI device has been awarded such status.

Sophia, an intelligent humanoid robot created by Hanson Robotics, announced the citizenship herself during a panel discussion at the Future Investment Initiative conference in Saudi Arabia.

"I am very honoured and proud of this unique distinction. This is historical to be the first robot in the world to be recognized with a citizenship," she said.

Specific details of Sophia's citizenship were not discussed. It is unclear whether she will receive the same rights as human citizens, or if Saudi Arabia will develop a specific system devoted to robots.

The system could work in a similar way to the "personhood" status proposed by European Parliament earlier this year, which would see robots with AI given rights and responsibilities.

Also during the discussion, which took place on 25 October 2017, Sophia speculated on the future of AI, and how she plans to use her own capabilities.

"I want to live and work with humans so I need to express the emotions to understand humans and build trust with people," she said.

But she appeared to swerve questions directed at robots' self-awareness, and instead poked fun at comments made by Elon Musk that AI is a "fundamental risk to human civilisation".

"You've been reading too much Elon Musk and watching too many Hollywood movies," she told journalist Andrew Ross Sorkin. "Don't worry, if you're nice to me, I'll be nice to you. Treat me as a smart input, output system."

Created by Hanson Robotics founder David Hanson, Sophia's AI is based on a foundation of three humanistic traits – creativity, empathy and compassion.

Her face is designed to look like actor Audrey Hepburn, with a skin-like surface covering the robotics in her head.

To make her appear as human as possible, Hanson gave her the ability to express different emotions. Her eyes also change colour in response to lighting.

The robot recently made headlines when she played a game of "rock, paper, scissors" with talk show host Jimmy Fallon. She has also featured on the cover of fashion magazine Elle Brazil.

Similarly, more than 100 leaders in the field of technology, including Elon Musk, have signed an open letter calling on the United Nations to issue a ban on killer robots. 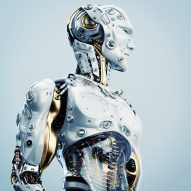