John Pawson designed the trophies for this year's Fashion Awards, which are each made from a cylindrical block of Swarovski crystal with a coloured "thread" encased in the middle.

Following in the footsteps of Mark Newson, who designed last year's trophies, London-based Pawson was commissioned by the British Fashion Council and Swarovski to create a trophy for each of the 12 categories at the Fashion Awards 2017.

Crafted from Swarovski crystal, the design is typical of the architectural designer's minimalist aesthetic. Each trophy is simply decorated by a primary coloured stripe running through its centre.

Its top is sliced at an angle, and the awards logo and category are printed lengthways in black lettering.

"I wanted to design something reduced to its simplest possible form, in this case, the cylinder – something you could hold in your hand," said Pawson.

"The crystal cylinder encasing a lacquer 'thread' through its centre is partially faceted, with an oblique top featuring a lens. Its design means that all four sides provide a different view of the thread."

By using a multicoloured palette for the threads, Pawson wanted to represent the "diversity" of the 2017 award winners – who will be announced at a ceremony later this month.

"The palette of thread colours is distinctive when viewed individually and engaging when viewed as a collective, which speaks of the diversity of the 2017 award winners," he said.

Apart from designing boutiques, including Christopher Kane's London store, this is the first time Pawson has worked in fashion since assisting in his father's clothing store in his 20s.

"Given this personal history, there is nice resonance in being able to create something that celebrates achievements within the industry," he said.

Having completed a string of minimal boutiques and religious spaces, Pawson unveiled his most high-profile project to date – the new home for London's Design Museum – last year. 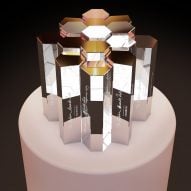 The Fashion Awards 2017 will take place at London's Royal Albert Hall on 4 December. Designers up for accolades include Christopher Kane, Balenciaga creative director Demna Gvasalia, and Burberry chief creative officer Christopher Bailey – who recently announced he is to step down from the company after 17 years.