Google has launched a digital library of user-created 3D objects that can be used to populate virtual- and augmented-reality worlds.

Called Poly, the open-source database functions like a clip-art library, allowing anyone to find and download 3D shapes – from simple trees and animals, to complex buildings and environments.

Currently everything on the platform is free and licensed under Creative Commons, meaning the objects can be freely used to populate VR and AR games, and can also be used in architecture and design.

As the platform is open-source, users are invited to upload their own 3D objects to the library. But to kickstart the project, Google commissioned various artists to stock the virtual shelves, with objects ranging from pizza to poodles, dolphins to demons, and much more besides.

These models favour a low-polygon style, which is understood to have been a stylistic choice from Google. However, the simple rendering also means the objects should load quickly on Google's Daydream VR platform.

The objects and complete scenes can be viewed and downloaded on mobile or desktop browsers, and used with developer apps such as Google's own ARCore or Apple's version, ARKit.

Users can modify and re-upload objects to a new listing – but Google will always credit and link back to the original source.

The database is expected to become a useful tool for VR and AR hobbyists and developers who are just starting out, as most professional game designers are more likely to use objects they have created themselves.

In terms of architecture, the library already includes 3D renderings of skyscrapers, cabins, lighthouses and even the Colosseum.

A search for the word "chair" brings up moveable models of kitchen chairs, desk chairs and deck chairs, as well an item called That Expensive Chair, which looks remarkably like a pixel version of the Eames Lounge Chair.

Google launched a number of tech-enhanced physical products last month, including headphones that can translate directly into the wearer's ears, and a mini camera that uses facial recognition technology to automatically takes a good photo.

Facebook also launched a new piece of VR tech in October – a headset that doesn't rely on a phone or a computer to work. 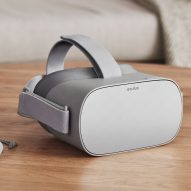