Deep walls with built-in storage are designed to accommodate an expansive collection of art objects at this renovated apartment by New York City-based MOS Architects.

The residence contains a master suite, an office that can be used as a guest room, and an open-concept social space that includes the kitchen, dining room, and living room.

Interior partitions were built 16 inches (40 centimetres) deep, creating large shelves within which art can be stored or displayed. "The apartment is defined through cabinetry as hollow walls that enclose rooms and provide storage for the resident's extensive collection," said MOS, which described the storage units as "cabinets of curiosities".

Within the living room, two large display cases allow the client to put specific objects on view. They were built in light-coloured wood, contrasting the white finish of the walls.

All the apartment's windows face south, and extend to the full height of the living space. Because the office and living room are connected, a curtain runs continuously between them, unifying the separate areas.

Throughout the home, wooden floors were laid diagonally against the right angles of the storage walls. On the ceiling, track lights follow this pattern, which the architects explain is a way of tying together different spaces visually.

Particular attention was paid to materials used for the intervention. The kitchen counter, for example, is made of a pale marble that also forms a large backsplash reaching up to the ceiling. The expansive counter surface also doubles as an informal eating area for the residents.

Three bathrooms all feature a unique material palette. This acts "as a counterpoint to [the apartment's] collection of unifying, all-over patterned surfaces", according to the architects.

The first one is finished in black Marmoreal, a bespoke composite marble made up of brightly coloured aggregates. It serves the public areas of the apartment. Custom peach-coloured ceramic tiles with a ribbed pattern were used for the second bathroom, which is used by guests and residents alike.

At the end of the hall, the master bedroom has its own ensuite, which is finished with white marble. Another storage wall separates this area from the bed.

MOS was one of the firm's that contributed an alternative vision for the famous Tribune Tower competition, on show at this year's Chicago Architecture Biennial. Other projects by the firm include a floating house on Canada's Lake Huron, and a series of angular buildings for an arts school in Denmark.

Photographs are by Lauren Coleman, courtesy of MOS. 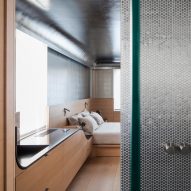