A wall that depicts a scene of overflowing greenery is one of the original features that Nook Architects has preserved during the overhaul of this apartment in Barcelona.

Located in the city's Gothic quarter, the End of the Roc apartment follows four other renovation projects that Nook has completed in the same building.

Others include the colourful G-ROC apartment, which features a mezzanine sleeping platform, and Casa Roc, where modern fittings are combined with old mosaic flooring.

For its fifth intervention, the local firm was asked to update the 45-square-metre home while keeping some of the building's existing quirks. They were also tasked with optimising space and functionality – as the apartment had previously been divided into several cramped rooms.

"Our approach to End of the Roc revolved around the restoration and consolidation of the building's original character," Nook said.

The architects decided to preserve a mural-style wall covering that has been in the apartment for 40 years. Appearing as a greenhouse-like scene at the rear of the kitchen, real potted plants have been suspended directly in front to "give a greater sense of depth".

As well as wooden beams on the ceiling, the original patterned floor tiles have also been retained – those that were beyond repair have been replaced with Portland cement. Other surfaces and furnishings in the apartment have been crafted from oak or painted black for visual continuity.

To make the apartment seem more spacious, the practice removed a central partition to create an open-plan living and dining area.

Steel profiles were then installed throughout to secure and strengthen cracked walls. In the bedroom these profiles double up as overhead storage, and form railings where inhabitants can hang their clothes.

Taking advantage of the high ceilings, the architects also inserted an angled plinth above the kitchen where other possessions or ornaments can be kept.

Nook Architects is led by Ana García, Joan G Cortés and Rubén F Berenguer. Specialising in the refurbishment of Barcelona's historic buildings, the practice has recently uncovered the original tiles and timber beams of a 273-square-metre apartment in the Raval district.

Photography is by Yago Partal. 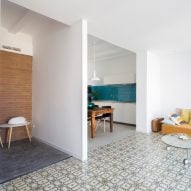