London-based designers Nathan Smith and Sam T Smith have created a book filled with postcards made by UK creatives in reaction to last year's Brexit vote.

The Me & EU project began in 2016, when Nathan and Sam tasked artists, graphic designers, illustrators, and photographers with creating a postcard-sized image that represented their view on the referendum result.

The 116 designs range from an illustration of a "shocked" London Eye to a parody of the horror film The Shining, which was adapted to feature then-UKIP leader Nigel Farage.

The reverse of each postcard also features a personal message from its designer.

"Postcards provide an intimate medium for individuals to express their feelings on a personal level," the pair told Dezeen. "Collectively, they are a creative view of Brexit and a visual narrative of a country in transition."

In these individual submissions, Nathan and Sam wanted to create an open dialogue between artists and designers internationally.

The pair dispatched the cards to European studios and artists on the day that Article 50 withdrawal process was triggered, as a means to encourage collaborations post-Brexit.

The postcards are now also available to purchase as a book, by London publishing house Common Practices.

"The morning of the EU referendum result and the sudden realisation that Brexit was becoming a reality hit us very hard," the designers told Dezeen.

"It brought a global sense of division and so we wanted to do something, no matter how small, to decrease this void and to remain connected," they continued.

Me & EU is among the 62 projects nominated for this year's Designs of the Year awards and is currently on show at an exhibition at London's Design Museum.

In a year that saw Britain vote to leave the EU and Donald Trump become the US president – many of the nominations, inevitably, have more of a political focus.

Projects in the shortlist include the pink "pussyhat" with cat-shaped ears, which became a symbol of the Women's March on Washington following Trump's inauguration, as well as Wolfgang Tillmans' Remain Campaign for the Brexit referendum.

"Politics in the past couple of years have hit the ground.  People have been touched by politics and ME & EU gave the creative community a channel to create a dialogue," said Nathan and Sam. 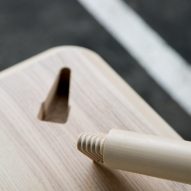 "We find the idea that the creative community can trigger a change in areas of such importance, no matter how big or small, an empowering notion. This is the role design should continue to play," they continued.