The V&A museum has salvaged a three-storey section of Robin Hood Gardens, the much-debated brutalist social housing estate by Alison and Peter Smithson that is currently being demolished in east London.

The V&A has acquired two sections of the estate's garden- and street-facing facades, including one of its elevated walkways that were central to the "streets in the sky" concept devised by the Smithsons.

The architects completed Robin Hood Gardens – a pair of crooked concrete slab blocks sandwiching a central garden – in 1972 in Poplar.

Despite an unprecedented campaign by high-profile architects and preservation bodies to have the buildings protected by listing, they are now being pulled down to make way for a much denser housing development.

With the demolition of the estate's west block now underway, the pieces of the prefabricated concrete facade acquired by the V&A are being stacked onsite awaiting their removal to the museum's storage facility. 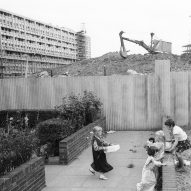 "It's not just the object that we're preserving but it's the issues that we want to keep alive," senior curator of designs, Olivia Horsfall Turner, told Dezeen.

"Because of the controversial nature we're anxious that people see this as a real opportunity to maintain conversations about social housing, about urbanism," she continued.

"It's something we feel is really important as the role of public museum to keep those conversations going and provide people with compelling objects that they study and experience in order to make those issues real to them."

The acquisition comes at a time when debate around the UK's social housing is very much at the fore, with the Grenfell Tower fire tragedy and RIBA' subsequent decision to award its highest accolade to "pioneer of quality public housing" Neave Brown.

The section of facade taken from Robin Hood Gardens reaches almost 9 metres in height and 5.5 metres wide, representing a full section of the repeating pattern of prefabricated parts that form the buildings' faces.

Original fittings, including cabinetry that forms some of the interior walls, is also be retained and will be reinstalled between the facades when put on show by the V&A.

The museum has yet to reveal its exhibitions plans for the piece, but limited space at the museum's South Kensington campus point towards its new east London facility.

"We've been very ambitious in what we've decided to take, we tried to maintain an integrity in the plan of the building in terms of how the flat system works and the way that the facade system works as well," said Horsfall Turner.

"We will be able to recreate the experience of walking into the flats through the front door," she added. "It's amazing, they're architectural Rubik's Cubes."

The V&A acquired the piece by contributing to the costs of its extraction from the demolition site, which is owned by Tower Hamlets council.

In the run-up to the beginning of the estate's demolition, critics have slated Historic England's decision not to list the buildings.

Alison and Peter Smithson's son, Simon Smithson, described the decision as an "act of vandalism", and writer and curator Owen Hopkins claimed post-war architecture was being used as a "convenient scapegoat" for today's political and social problems.