Adidas has created football kits inspired by memorable designs of the past for teams competing in the FIFA World Cup 2018, including Germany, Spain and Argentina.

The sportswear brand has released images of national kits for eight countries – also including Colombia, Japan, Belgium, Mexico and host country Russia – ahead of the tournament next year, which will be the 21st edition of the World Cup.

They were each created by studying the footballing histories of the different nations, focusing on memorable aspects of kits worn in the most successful years.

Adidas then combined these design elements with the company's latest innovations, to create functional garments that pay homage to past glories.

The home jersey for title-defending team Germany is a contemporary take on their shirt from 1990 – the third time they won the trophy, and the last win before their 2014 victory.

The shirt features an updated monochrome version of the old printed graphic, which runs horizontally across the chest, and a gold World Cup winner's badge.

The jersey features a two-fabric component collar, which has the national team nickname Die Mannschaft written on the back.

Meanwhile, the inside is printed with the original red, yellow and black version graphic from the front of the 1990 shirt, to link the two different eras.

Spain's national side, who won their first World Cup in 2010, will take to the field in a traditional red and yellow kit. It features a diamond-shaped printed pattern down the right-hand side, last seen on their shirts in the 1994 tournament.

Featuring an overlapping collar, the shirt comes with Adidas' Climachill cooling technology. The German company's logo is printed in the centre, as it was 13 years ago.

The strip is completes by navy black shorts and socks.

Colombia's striking new yellow home kit is directly inspired by their iconic World Cup 1990 version. It features similar spiky blue and red graphics on the side of the shirt, matching the colours of the South American country's flag.

Printed on the back of the neck is a slogan reading UNIDOS POR UN PAIS, which translates into English as "United for one country".

The blue shirt features a minimal white all-over print on the front, which imitates the appearance of a Japanese stitching technique known as Sashiko, which usually features white intermittent threads on an indigo-dyed material.

To symbolise the national flag, the shirt has a simple red v-neck collar, as well as Adidas' signature three stripes along the shoulders in white.

Host nation Russia's new shirt is a revision of the jersey worn by the Soviet Union during the 1988 Seoul Olympic Games, where they came first in the medal count, winning 132 in total, including 55 gold medals.

The red jersey replicates the original's thick white v-neck collar and solid white lines running around the back of the shirt across the upper arms and onto the chest.

Russia's flag and the Russian eagle are printed on the inside collar, as well as the words Вместе К Победе, translating to "Victory-bound as one".

Adidas used Argentina's new home kit as an opportunity to celebrate the Argentine Football Association's 125-year anniversary, by incorporating laurels, a key element of the Argentinian coat of arms and the AFA crest, in a pixellated form within the shirt's traditional pale blue and white stripes.

The laurels can also be found underneath the AFA badge, which has two gold stars placed above it, in honour of the country's two World Cup wins.

As with Adidas' other World Cup kits for next year, the Belgium home shirt looks back to the past, with a refreshed take on the black, yellow and red argyle print from Euro 1984 design placed across the chest.

Following on from 1990's versions, the Mexico home jersey has a green base with white detailing on the collar and stripes.

The garment also has a graphic pattern running from the curved red hem up towards the armpit, harkening back to the eye-catching all-over print of the World Cup 1994 shirt.

"Adidas has created so many products, innovations and looks through the decades which became true icons in the football world. We want to celebrate those icons in the world of today," said Juergen Rank, senior design director at Adidas.

"The fans feel the same way. They want something they immediately can identify with but at the same time it needs to contain the latest innovations and technologies of today." 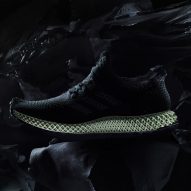 Adidas, who is the official supplier FIFA World Cup, also referenced footballing history earlier this year when it rereleased the classic Predator Mania football boots, made famous by footballer David Beckham during the 2002 World Cup in Seoul.

But the German company, which ranked 18th in Dezeen Hot List 2016, isn't just looking to the past with its new releases. It also launched various innovative products in the last year, from sustainable trainers made from ocean plastic to shoes that pioneer a new additive-manufacturing technique.