The Bora Residential Tower is being built in Santa Fe, a major business district in the west of Mexico City – home to tech companies Microsoft, Apple, Sony, Roche and Amazon, as well as three universities.

Zaha Hadid Architects (ZHA) was given a prime location for the building, beside the Mexicana park and in walking distance to schools, theatres, cafes and restaurants. It will also be near to the new Santa Fe Transit Hub, which will offer a quick connection to the city's metro network.

As the area is suited to a range of potential buyers, like families, retirees and young professionals, the British firm designed the building with six different layouts, which are arranged as separate sections around the central circulation.

The tallest of the sextet will have over 50 storeys – a feat that ZHA claims will make it the "highest residential tower in Mexico City".

In total, the building will include 200 apartments of one, two and three bedrooms.

Each will have two glazed sides to make the most of natural light and views to the surroundings. These will open onto private terraces so that residents can enjoy the mild, subtropical climate.

Newly released renderings show that the balconies will have a triangular profile, and be offset from one another so as not to block light to levels below.

The tower tapers inwards at the base, as the corner edge skirts out over 10 storeys to form canopies over public space below.

Mexico City is in a seismically active region and was hit by a deadly earthquake earlier this year. ZHA has designed its tower to withstand high-magnitude tremors, using lightweight and flexible construction materials, and adding the canopy for stability.

The Bora Residential Tower is one of the many projects that ZHA was undertaking at the time of its founder Zaha Hadid's death last year. Hadid worked on the project with partner Patrik Schumacher, who is now leading the studio. 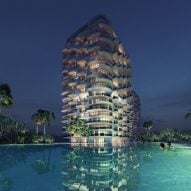 The firm's other projects in Mexico include a sinuous apartment complex in Monterrey and residences near Cancún.

Visualisations are by LabTop.