Beer brand Brewdog has released a new drink, featuring both a recipe and packaging designed to raise awareness about the impact of climate change.

The beer is titled Make Earth Great Again, in reference to the slogan used by Donald Trump for his election campaign. It features packaging that shows the US president battling a polar bear, and a recipe that uses ingredients from areas affected by global warming.

Brewdog describes the product as a protest against the USA's decision to withdraw from the Paris Agreement earlier this year.

It calls it an attempt to "shake the world by the shoulders and remind leaders to prioritise climate-change issues".

Brewdog – an independent craft brewery and pub chain based in Scotland – worked with London duo The Red Dress to draw up the beer's label. It is based on a concept developed by Brewdog creative director Simon Shaw.

The illustration, which features a style reminiscent of comic strips, shows Trump as a weaponised robot. He appears to be taking fire at a polar bear – an animal often used in campaigns against climate change.

For the beer's recipe, Brewdog picked ingredients that are directly connected to climate change. It is made using water sourced from melting Arctic ice caps, as well as Arctic cloudberries, which are now classified as an endangered species.

These were used to create a Saison pale ale – a brew that is fermented at a greater heat than any other style of beer – in a nod to global warming.

"This beer is our statement of intent, to hold a mirror up to all of the establishment figures that could and should do more on an issue that affects everyone on the planet," said BrewDog co-founder, James Watt.

"We hope everyone who can make a positive impact on climate change at a legislative level takes note of what the beer represents."

America was one of 195 signatories of the 2015 Paris Agreement – an accord listing actions countries would voluntarily take to reduce greenhouse gas emissions. Trump announced USA's withdrawal from the treaty earlier this year.

Brewdog has sent a case of Make Earth Great Again to The White House, in the hope of turning the president's attention back to the issue.

In addition, visitors to Brewdog bars in London and Ohio will be served the beer from a tap built inside an artificial, life-size polar bear's head.

All proceeds made from the beer will be donated the projects of UK-based climate change charity 10:10, which tackles climate change at a community level, in the hope of encouraging government to change legislation.

Dezeen recently questioned whether designers can help prevent climate change as part of our Good Design for a Bad World talk series. 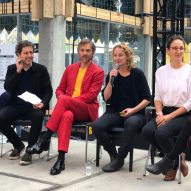