Launched today, One Shared House 2030 is a collaboration between Space10 and Brooklyn design studio Anton & Irene. The project's aim is to explore and develop ideas for shared living to solve current housing problems, like affordability, rapid urbanisation and loneliness.

Co-living complexes, where residents share facilities, have already been developed in response to such issues, with recent projects by WeLive and The Collective. But Space10 and Anton & Irene are hoping to establish a framework for future developments better adapted to changes in modern lifestyles, including the introduction of self-driving cars and more people working from home.

On the block-coloured website, users are invited to sign-up for a co-living space for the year 2030 and then proceed to a survey on 21 topics, from commuting, personality, furniture and pets.

"Our cities have never been more attractive to the many people," said Space10's Guillaume Charny-Brunet. "Yet in the context of booming urbanisation, rocketing housing prices, shrinking living spaces and increasing social disconnects, 'sharing' will be 'caring' more than ever."

"Co-living isn't new, but as both space and time are increasingly becoming a luxury, the concept needs a revamp," he continued. "Space10 is going on a journey to explore the potential of co-living to better the lives of city dwellers across the planet."

Questions include preferences on who would be preferable to share with, services provided by the accommodation, personality of housemates and size of the community.

Some are accompanied by imagined statistics for the year 2030, to nudge responses about how these figures might effect the way people live. For example, a pop-up alongside the topic of commuting describes that the transition to self-driving cars and how this would make parking spaces "a thing of the past", and provide an abundance of extra space.

"One Shared House 2030 is a playful research project that aims to get insights on the future of co-living through a collaborative survey," said Anton & Irene co-founder Irene Pereyra. "The goal is to be able to better understand what specific demographics prefer what type of co-living."

Information is gathered according to gender, age, marital status and birth country. The results are continuously corroborated and open for anyone to view with an interactive tool for changing the filters on each of the different sections.

IKEA launched the Space10 innovation lab in late 2015 to test product prototypes and find ways of boosting consumers' wellbeing. It has previously experimented with food, including a look into the future of the meatball, a dome for growing microalgae and a pop-up hydroponic farm.

One Shared House 2030 marks the lab's first investigation into co-living, which some believe will dramatically change the way people live.

The entrepreneur behind London start-up The Collective has said home ownership will become a thing of the past, while designer and TV presenter Naomi Cleaver said co-living could solve London's housing crisis. 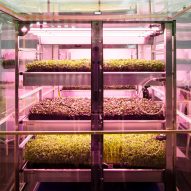